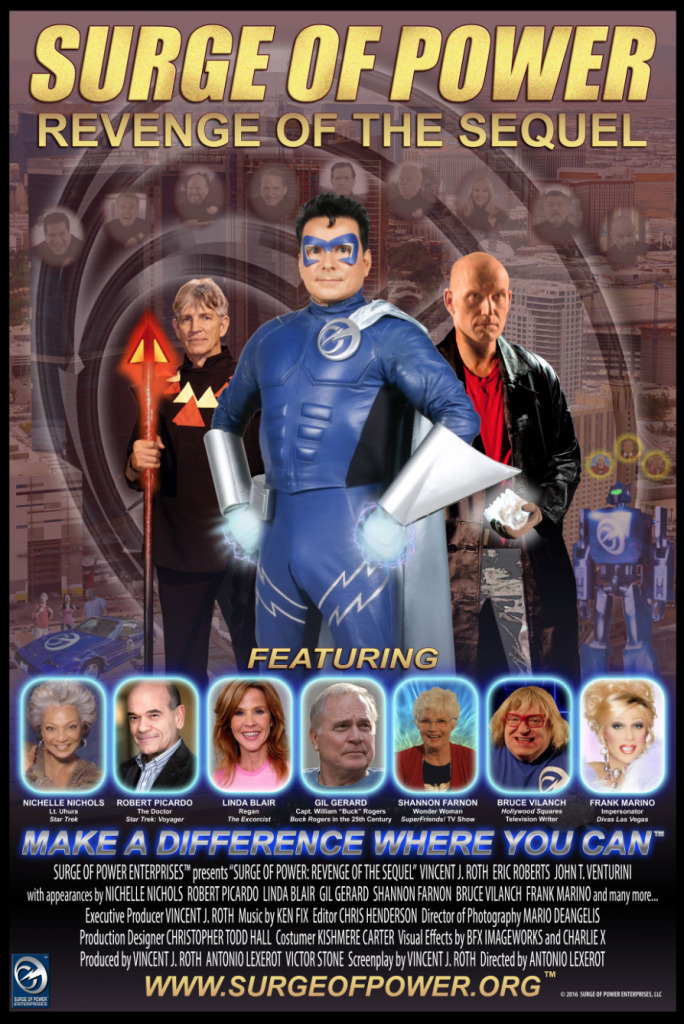 If you’ve heard anything about the first film, you should be intrigued by what is to come next.


Directed by Antonio Lexerot, Surge of Power: Revenge of the Sequel commemorates the ten-year anniversary of the release of the first movie in 2006; Surge of Power: The Stuff Of Heros.

It was a very brave, independent film to put out there originally, as the underlying story is through Surge (played by Vincent J. Roth, who is also collaborating director,) the first out gay superhero. We have never seen anything like this on our screens before, so it was a pretty big deal when the film came about.

It is written with a cheesy kind of humor that you have to like, but somehow it still manages to be tasteful and carries the undercurrent of the story very well.

The first film followed the typical superhero plot about a middle-aged man who had an accident in his friend’s lab, and somehow left him with super powers.

He decides he’s going to become a superhero and he feels that with that, comes a great costume. Now, of course, he runs around in a cape, and everyone thinks he looks ridiculous – because frankly, he does. But the film plays into this silly side knowingly, so it never allows you to laugh at it; only with it, and viewers can appreciate that within the first 10 minutes of watching the movie. A film that isn’t afraid to be over the top, especially while talking about some serious subjects, is a film that earns the respect of a lot of people.

Surge goes on many adventures fighting crime and winning the hearts of the public (or not), but he is absolutely not one to give up trying! All this is happening while building a relationship with another man, who doesn’t yet know his true identity.

Vincent J. Roth plays his character well. He brings a sense of humor to being the first out gay superhero. You can’t help but love him. But don’t expect the performance to be a subtle one because it’s definitely not.

Within the film, there are over 50 celebrity appearances, and this adds a pop of excitement when watching. You find yourself having many of those “Wait, isn’t that -” moments, which is pretty fun.

As it’s now 2016, the new film’s camera quality has without a doubt got a lot more appealing to the eye. The colors are brighter and a lot sharper, which is all to be expected as it’s ten years on.

As far as the special effects go, they still aren’t very realistic. But in defense of the film, they are an independent film company, which means they’re running off a low budget. So you can’t expect to see anything better than what they have given us.

Having said that, you do find yourself questioning what the hell you’re watching a couple of times throughout the movie, and that’s not necessarily a bad thing.

The plot for the Surge of Power Sequel, focuses on Surge’s rocky relationship between his love interest (Metal Master, played by John T. Venturini), who has recently got out of jail. He tries to help him shake away the villain in him, because he knows that deep down, he has a kind heart. This all happening while he’s fighting crime and trying to win the trust of the people.

This is a very interesting plot to watch unfold because although the general film is dramatized into some overacted, comical movie – it taps into a lot of issues faced in today’s society.

One of the most powerful moments was when Metal Master got told by Augur (Eric Roberts), that the world will never accept him, so he should make them fear him instead. It’s very deep, and sadly so true in many different cases whether that be for homophobia or racism, etc. And the way the film shines a light on this is very cleverly done.

One of the best lines said in the whole movie by Surge is “Homophobia won’t go away by making people fear us.” And that speaks for so many different issues and topics in our world right now.

So here’s the summary, this film may not have a million dollar budget to spend on amazing effects and quality costumes, but what it does have is balls. It’s a brave and honest film, written in a comical manner, to get its point across. (Plus a whole bunch of famous people!)