David Lynch: The Art Life is everything that the filmgoing community has come to expect from the strange and beautiful mind of its subject matter. It’s a dark, surreal and strangely beautiful glimpse into the mind of David Lynch, which is understandably a unique journey.

The entirety of The Art Life is composed of disjointed images and shots of Lynch in his home in the Hollywood hills. His backyard has become his art studio and this is where he seems to spend most of his time, painting, pondering and smoking. Lynch himself narrates this strange journey in a continuous monologue, talking about his art, his philosophy and his time growing up in Montana and Idaho. Shots of him sitting with a microphone implies that most of it was simply a stream of consciousness that has been layered over the film, which gives the whole piece a very strange, unique feel.

This is a film for the art house crowd. A pseudo-documentary about David Lynch is of course going to be a very strange experience but this is that and then some. Frequent cuts to Lynch’s paintings are unsettling, his art goes to some very dark places, and the sad stare that the camera gets from his eyes hints of some woeful memories behind that gaze. 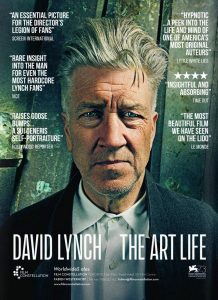 Lynch has to be one of the most unique and important filmmakers of his era. Any film buff knows him by name and some of the images that he has captured over the course of his 51 year career are iconic. Those who go into this experience wanting a simple overview of his life and films won’t quite get what they’re looking for; this is an art film first and a biopic second.

This is a fascinating film about a fascinating man. Lynch certainly seems to be living the life of an auteur – painting, smoking, pondering and drinking red wine, often all at the same time. He’s an introvert who seems to look at himself from the outside in. All credit is due to Jon Nguyen and his team for taking the time and effort to put this film together, for it seems that very few people could have.

Walking away from the cinema, it felt like the last 88 minutes had drifted by in a trance. Even while watching the film it’s like recalling a half remembered fever dream, not knowing the rhyme or reason that things had happened the way they did but relishing the trip nonetheless. It was reminiscent of the first watch of 2001: A Space Odyssey, an equally unique and original film experience. While this is only going to be enjoyed by a select audience, those who seek out this sort of thing will be rewarded greatly with Lynch’s trademark strange and unsettling style.

Better yet, find yourself some funny smelling cigarettes and you’ll have one of the most wild and original film going experiences of your life.

David Lynch: The Art Life is screening as part of this year’s American Essentials Film Festival from 11th to 24th May.

Written By
Simon Storey
More from Simon Storey
“If beauty is truth and truth is beauty, well then surely mathematics...
Read More