‘Amadeus’ means ‘love of God’. It’s interpreted in a few ways but in this context it would mean ‘beloved of the Almighty’; the big cheese Himself holds a special affection for this particular object. In the case of the latest live-streamed play from London’s National Theatre, this object is none other than Wolfgang Amadeus Mozart – the greatest composer of the classical era and possibly the greatest who has ever lived.

Based on the stage play by Peter Shaffer (who unfortunately died last year), Amadeus is the largely fictionalised story of Antonio Salieri, another prolific composer operating in Vienna at the time whose fascination and enraged jealousy with Mozart created a rivalry which eventually turned deadly. The same text was adapted into Miloš Forman‘s 1984 masterpiece which won that year’s Best Picture. Now in the original form of a play, Michael Longhurst has directed an ambitious and original but not totally successful adaptation of this magnificent play.

Lucian Msamati plays Salieri, the offical composer for the royal court of Vienna – a position which was sought after by any composer working at the time. Breaking the fourth wall, he tells us that after leaving Italy and pledging to God that if he was given the gift of music he would serve Him for the rest of his days, Salieri has worked hard for his goal of being a great composer. He’s good, very good in fact, but this all changes when a young and cocky young composer comes to Vienna named Mozart.

Mozart, played explosively here by Adam Gillen, was not a grim, serious or contemplative genius that is the usual stereotype of any classical artist – he was loud, restless and had the manners of a child. Salieri, and quite a lot of the Viennese aristocracy, hate him almost instantly. Yet this was not just any composer. Mozart was a genius in the very sense of the word. Composing his first piece of music at the age of five and his first symphony at eight, his skills as a musician and as a composer were simply unparalleled. To Salieri, who has devoted his life and faith to his craft, this was nothing less than an insult from God. 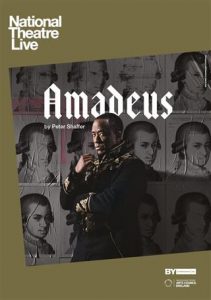 Longhurst has crafted many new and exciting things into this grand play. For one, the orchestra are not sitting in ordered seats up the front. In a slice of inventiveness, the music is played on stage by musicians who are able to get up and walk around. While the quality of the music takes a slight hit on account of there being no central composer who makes sure that everyone is on cue, it’s a great way to open up the stage. The actors can work off the energy of the music close to them and in terms of theatre it’s a way to break new ground.

Lucian Msamati delivers an incredible central performance. For an actor whose previous claim to fame is a small part in Game of Thrones and a few parts in British television and theatre, he enters the big leagues with a powerful take on Salieri who was so memorably played by F. Murray Abraham in the film. The use of colour blind casting might raise a few eyebrows at the fact that a black actor is playing a historical figure who was white (one imagines the justified reaction that would follow the situation if it was reversed). Yet when the quality of performance is as good as Msamati is here there’s no reason for huffing and puffing over something as trivial as the color of the actor’s skin.

Unfortunately, this production is held back from greatness by a few misjudged production details. The character of Mozart is supposed to be annoying but Adam Gillen doesn’t hold anything back. It works a little too well. The screeching hysterics of Gillen’s performance are enough to start grating after only a few minutes. Imagine if an ill-disciplined child was force-fed pixie sticks and Redbull then let loose – that’s what it’s like being around this character. It starts as annoying and then becomes aggravating after only the first scene with Mozart – and this is a play of almost three hours. This isn’t a comment on the actor, but rather on the choice to turn up his theatrics to the ridiculous and supremely vexing way it comes across. I get that this is what he’s supposed to be doing but it doesn’t mean that the audience will like it.

Anyone who loves music and theatre will be well advised to check out this large and impressive adaptation of Shaffer’s brilliant play. However, writing as someone who is a big fan of Forman’s film, it still stands as the best introduction to this excellent piece of music and storytelling.

NT Live: Amadeus is in selected cinemas from 6th May through Sharmill Films.

Written By
Simon Storey
More from Simon Storey
Based on Colin Thiele’s children’s book, which gave us the Australian classic...
Read More