Pork Pie is a tale of three runaways. Directed by Matt Murphy, it is a New Zealand Bonnie and Clyde meets a Michael Bay action extravaganza, but without the grit, tenacity or French New Wave aesthetics. In fact, it’s just a remake to the 1981 film Goodbye Pork Pie.

Thrown into a hectic opening we meet the first runaway in question. Troubled Maori teen, Luke (James Rolleston), steals a car and flees from a bunch of thugs, very smoothly. Next up we have a dishevelled writer, Jon (Dean O’Gorman), who crashes at his friend’s house much to the anger of his missus. After finding a wedding invitation intended for the couple, Jon decides to seek out his former girlfriend Susie (Antonia Prebble). Trying to hitch his way to the wedding, Jon is nearly run over by Luke in the stolen car. They get talking and Luke reluctantly offers him a lift.

The third and final outlaw is vegan, Keira (Ashleigh Cummings). Keira works for a nasty burger joint, has a nose ring and hair loosely pinned up (interesting to note that this would probably not be expected working in the kitchen). Fed up with customer service, being chatted up, and I guess, the meat, she quits. It so happens that Luke and Jon are in the drive through during this outburst, so Keira also jumps in. 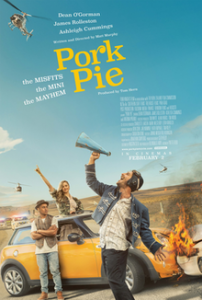 Pork Pie speeds through its 105 minute duration without dragging too much and does keep the entertainment up throughout, but if you’re to compare it to the unique charm we expect of New Zealand cinema thanks to Taika Waititi‘s films, then this is pretty average on the comedy front. Waititi of course isn’t the only prominent New Zealand director, but this narrative has a similar sensibility, led by contrasting characters. Luke is younger and had more of a problematic upbringing compared to Jon, yet Luke is well versed, respectable and can speak French. Jon on the other hand, perhaps the bad guy who needs to redeem himself, is pretty white, metaphorically and physically. And as for Keira, being vegan feels like a schtick and a point for contention.

You see this with more charm and sincerity in Hunt for the Wilderpeople. Hec (Sam Neil) and Ricky (Julian Dennison) are equally contrasted in grammar and socioeconomics but able to learn and grow from one another in a way that makes you go on that journey with them.

Generally speaking, a lot of Pork Pie feels forced and deliberate, in order to satisfy the next scene or set up the next joke. There’s nothing spontaneous, or anything that goes outside of the box to explore a character in a different sense without the stereotypes. Not to mention, as three very different people it does seems unusual that Luke, Jon and Keira would form such a strong mateship so quickly without any tension.

There’s a thing called suspension of disbelief and you do get to expand upon this, but only through the Michael Bay side of things. The car chases and visuals are the more enjoyable moments.

Adhering to the Bonnie and Clyde references didn’t fit the overall car chase narrative; it made it too clear that this is now the arthouse-ode-to-cinema part. It really stood out. It makes audience instead reflect on the classic and realise that Pork Pie doesn’t do much passionately or with purpose.

Pork Pie is in cinemas from 4th May through Studiocanal.