At some point there must have been a very strange series of meetings that took place in a back room of Marvel studios. Despite a highly successful single cinematic universe, they decided that their next multi-million project would be based on a very obscure series of comic books that even their dedicated fan base hardly knew about. It seemed pretty crazy… But here’s the craziest thing – it worked. $773 million later, it has near universal love from both fans and critics, the largest August release ever in the USA, and the whole world saying “I am Groot”. James Gunn and Marvell somehow managed to pull it off, giving us one of the best space faring action adventure films this side of Firefly. Hopes are high for this second instalment – which is good because Guardians of the Galaxy Vol. 2 is every bit as good as the first film.

Our band of misfits, outlaws and baby talking trees are back. After saving the galaxy a few months ago from the Kree military fanatic Ronan the Accuser, the team have started taking mercenary jobs to earn cash on the side. This brings them in contact with the golden skinned Sovereign people, who are led by their high Priestess (Elizabeth Debicki) and look like evil Oscars. Thrown into the mix are the brewing tensions within the intergalactic gangs including Michael Rooker’s Yondu and the arrival of Ego (Kurt Russell), a mysterious man claiming to be Quill’s father and who, if he’s to be believed, is Space Jesus.

Vol. 2 is everything it could have been. It’s a large, irreverent and funny entry into the MCU which expands the ongoing cannon but manages to keep its own sense of identity along the way. What distinguishes the Guardians of the Galaxy from the other MCU offerings is the totally bonkers lore, but more importantly the way in which these ideas are brought to the screen. Yes, there’s talking trees and jetpack sporting racoons but there’s also some surprisingly moving dialogues about the nature of family. 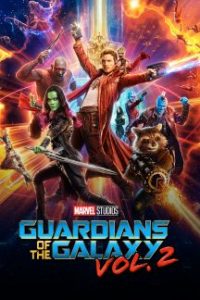 All the visuals are as incredible as you would expect. It’s an amazing state of affairs when the audience forms as much of an emotional connection with a CGI racoon and tree stump as they do to real people. There so much life and colour packed into every frame, a far cry from the ‘real and gritty’ flavour that has taken hold of so much popular culture.

Few films have had such an anticipated soundtrack. Awesome Mix Vol. 1 went platinum in the USA and it topped the Billboard charts for sixteen weeks, which is unheard of for what was essentially a mix tape. Awesome Mix Vol. 2 is as good as the first and it’s better if you avoid knowing the soundtrack listings before going in, because quite a few of the songs are weaved around plot points in some really clever ways. A scene near the end which uses a certain folk rock song from 1970 is a very special moment; try as hard as you can not to get it spoiled because by my reckoning it’s the stand-out best scene in the MCU so far.

Some of the regular Marvel flaws are here. The ratio of funny to lame jokes is about 50:50 and once again there’s another villain whose motivations seem contrived. The third act goes totally over the top again as well. Yes, this is a superhero film so of course the third act is going to be massive, but this is about the fifth time that the universe has been threatened and it’s losing all sense of scale and urgency by this point. It also slumps in the middle, but since this happens because everything is being set-up for the third act battle royale, we can give it a pass.

Casual film fans will have an absolute ball with this large, bombastic space opera,  Marvel fans might have a few conniptions at some of the bigger reveals. While it’s not quite as enjoyable as the first, simply because no one really knew what was coming with Vol. 1, this is a worthy and frequently surprising sequel.

‘Space opera’ is actually the perfect description, with emphasis on the ‘opera’. It’s big, dramatic, over-acted and totally exaggerated at every turn. Marvel films aren’t for everyone but if you’re even a casual fan, James Gunn has done it again.

Guardians of the Galaxy Vol. 2 is in cinemas from 25th April through Disney.

Written By
Simon Storey
More from Simon Storey
Alongside Charlie Chaplin’s persona as the Tramp and Buster Keaton’s phenomenal use...
Read More