After winning the Golden Globe for Elle, Isabelle Huppert returns to the screen for the new Mia Hansen-Løve film Things to Come, a narrative that takes its time to unfold, but does so in detail. When Nathalie’s (Huppert) mother, Yvette (Edith Scob) dies and her husband of 25 years, Heinz (André Marcon) leaves for another woman, Nathalie has to reassess life in her 50s. The film also focuses on Nathalie’s profession as a philosophy teacher and her friendship/relationship with former student, Fabien (Roman Kolinka).

Things to Come is delicate but bitey. The narrative doesn’t give you time to re-adjust to its shifting mood but you should get used to its tangents. You may also need to know some key philosophy ideals; the viewer is led in debates by Nathalie’s students, herself and her husband, who is also a philosophy teacher and connoisseur in music. This isn’t something you need to grasp better to enjoy; you do realise that this is more or less arbitrary. It is a cover-up to the underlying truth of the story itself. When this very simply opens up, it is about life’s ups and downs, making Things to Come an understated piece. 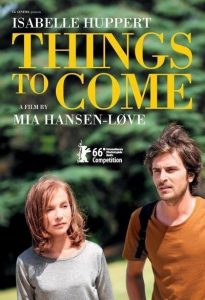 Things to Come looks at death and loneliness. Appropriate to its style and kind of similar to Michael Haneke’s Amour, it presents aging and the process of passing as a very uncomfortable and confronting experience. Things to Come is perhaps the lighter way of looking at these topics, yet still allowing for those aching moments to be real. This is captured by Huppert, a very distinct and striking presence on screen. Yet her character Nathalie is still able to embellish a humanistic and vulnerable side, helping us connect a little better. There is such a variation in her personality which is brought out through Nathalie’s three main relationships/conflicts. Although seen briefly, it is clear Nathalie has a strong admiration for her dominating mother. Yvette is charming and blue, and impacts Nathalie’s life, far beyond her death. Her close relationship with Fabien is a beautiful mixture of teacher/student son/mother and lover/tragedy, leaving a sour Romeo and Juliet aftertaste. Then of course, there is perhaps what Huppert does best: the aloofness. Always having the upperhand in her relationship with her former husband makes things funny and playful.

Things to Come is one of those films that leaves you bewildered as to how it made you feel or if it’s more amazing than simply the way it looks. In a sense, it is. It takes you on a journey floating from scene to scene, heavy but minimalist in every sense. This is good, but not setting a new benchmark. However, without giving away a major spoiler, it does leave you with a final statement that in a nutshell wraps up the film perfectly. That is enough to give Things to Come a satsifying resolution.

Things to Come is in cinemas from 27th April through Palace Films.