Set in immediate post-war Poland comes a bleak important tale. It is an excerpt from the real life story of young medical student Madeleine Pauliac. She is fictionalised artistically as Mathilde Beaulieu and played by Lou de Laage.

The French Red Cross is hard at work deep within Poland treating and repatriating their troops. A nun seeks out the services of Mathilde, beseeching her to come to her convent and treat one of the their guests who is in a painfully stalled labour. After some friction and initial misgivings from both parties, head nun Abesse (Agata Kulesza) reveals that Soviet Russians had sieged their convent committing mass rapes. Seven days of occupation resulting in seven unwanted pregnancies. Abesse is determined to hide this from fear of the wider community’s reaction. The bravery and altruism shown by Mathilde  in helping these deeply despairing nuns is the showcase of this sensitive and difficult film.

The film is difficult viewing (not just for the confronting subject matter). There is plenty to admire yet also issues with the technical aspects of the film.  Firstly there’s the scope of the story. Continually the film dwells into aspects of Mathilde’s life meant to humanise and establish empathy, which slow down an already drawn out 115 minute run time. It is arguable the film could’ve been compressed an hour by removing many scenes which do little to advance the story. A good chunk of the story is Mathilde seesawing between cold shouldering and embracing the courtship of her colleague Samuel (Vincent Macaigne). Their extended repertoire and dialogue do little to advance the story. 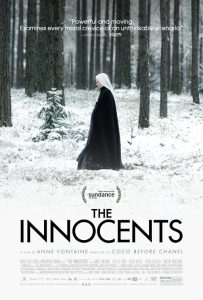 The second big problem is with the film’s main ensemble – the nuns who are, for lack of a better word, almost uninteresting! Beyond two key characters, no individual story is explored beyond small cursory introductions with Mathilde while she examines them. Out of those two aforementioned key characters one is written with zero moralistic or temperamental imperfections. Give us viewers a character with some kind of flaw or barrier. Beyond her adherence to authority there is no real tension or conflict to keep the film bubbling and engaging. It’s symptomatic of a film which has no bite and lacks conviction. Director Anne Fontaine does everything she can to steer the film away from any kind of high stakes and external drama.

What the film does get right is the emotional intensity and starkness it brings in presenting the human condition in horrific circumstances. Without skirting around it, these women went through a communal war trauma of perhaps the worst kind. The bravery they show and their stoic adherence to their faith is inspirational. The varied responses of individuals is an intriguing historic snap shot. The conflict of vows of chastity and motherly duties gives the film its emotional backbone.

The film’s stark nature and heroic characters are certainly deserving the merit of a cinematic telling. This movie however could’ve lost forty odd minutes perhaps and been more successful. What is included is but a snapshot of a transitional tale; either the scope of the story needs to be widened or the film shortened. The simple fact of the matter is that nothing is really on the line. The stake of the film lies entirely on the misplaced shame of the nuns and that just isn’t shown on screen. Nor indeed is the interesting idea of reconciliation of faith, which is talked about but never displayed either. Compensating for this is a masterclass performance from rising french star Lou de Laage. The Innocents is an important flawed film with moments of beauty and heightened emotion.

The Innocents is in cinemas from 27th April through Rialto Distribution.

Written By
Ben Isbel
More from Ben Isbel
Funny Cow is the stage name, and only credited name, of the...
Read More