Director Ben Wheatley’s vein of comedy is darker than most. It is probably a dark shade of red actually. He and screenwriting buddy Amy Jump routinely reduce the world to its most barbaric elements. Kill List, Sightseers and most recently High Rise come to mind – their uncompromising stories always veering towards a chaos that makes a laugh of resignation a pretty natural response. In their world the best laid plans of mice and men often go awry.

Of course classifying the plans at the centre of Free Fire as ‘best laid’ would be a stretch. Set in a deserted Boston warehouse in 1978, we have an arms deal taking place. Some members of the IRA led by Frank (Michael Smiley) and offsider Chris (Cillian Murphy) want weapons. Another crew led by a vain South African arms dealer (Sharlto Copley) want money for said weapons. Simple as that. Unpack the guns, hand over the money. Done? Yeah nah. These are not smart people, and if it’s not a done deal, then it’s every man or woman for themselves.

There’s a lot of talk about gun violence and toxic masculinity these days, and those not mutually exclusive cultures get a lengthy airing in this feature-length shootout. It’s hard not to avoid the elephant in the room, that there is only one woman present in a warehouse of dimwits – Brie Larson’s Justine, something akin to a deal broker – though nor can the dimwits. Far from trivialising her involvement, Free Fire revels in the confusion that this creates. The obvious focus in Free Fire might be a light-hearted scything of gun violence, but Justine’s presence, which goes as far as making this a comedy of manners at times, is the most interesting out of the ensemble, and Larson carries it well. 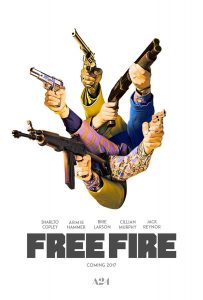 However, while this film is not afraid to have a few stabs at the politics of violence and gender, its heart is mostly in its comedy, and this mostly stems from a knowing ridicule of the genre and this ill-thought-through scenario in particular. Most obvious is the stupidity implied by a battle over guns in which almost everyone is a terrible shot, but entertaining turns from Copley and Armie Hammer (playing Ord, whose confident and outspoken role is similar to that of Justine) keep the dialogue lively.

As the wounds multiply and the curses swell, Free Fire does unfortunately lose momentum at least a few times before tying things up nicely. Wheatley and Jump, in sending up the action genre, periodically seem to enjoy themselves a little too much with the Battle Royale simulation, as each exchange of bullets slightly outlasts its welcome. As a result, instead of skewering this culture of violence, they might have glorified it in the attempt, and in those long stretches of clattering metal it is easy to see how, on the surface, the conception of Free Fire might be seen as being as dimwitted as its leads.

But that would be unfair, as certain allegiances and plot developments do add a few more layers to this than your average Guy Ritchie shootout and it would also be forgetting the perverse logic of Free Fire’s appeal. Except for Larson and perhaps Murphy’s character, we have no real reason to care about anyone, as they have all willingly walked into this scenario with dubious motives. Wheatley and Jump use this to their advantage. It allows them a certain freedom to play with their characters and their own significant filmmaking skills with the emotional distance one would have for a game of Risk, moving them around like pawns and shirking all necessity for a civil resolution.

The uncompromising nature of Wheatley and Jump’s work makes it a hard sell, particularly when their ideas employ a bloody survival instinct and a graphic imagination, and this does work against Free Fire periodically. The lack of women and the battery of bullets might also be a problem, even if that might be kind of the point. Regardless there is an appealing swagger to Wheatley’s direction and there is also a certain satisfaction to be gained from watching idiots prove their idiocy, which means Free Fire is one to watch with a spoon and great big tub of schadenfreude.

Free Fire is in cinemas from 27th April through Sony Pictures.

Written By
Angus Tonkin
More from Angus Tonkin
You may be a bit perplexed about the choice of Chris Columbus'...
Read More