Cannibal films aren’t in any way novel. Prevalent particularly in the ‘70s, the cannibal film only existed to sicken, shock and horrify audiences. In this respect, Raw can be understood within a historical context. But what differentiates Raw from past cannibal films is its visual style and its focus on female concerns.

Raw opens with Justine (Garance Marillier) and her parents (Laurent Lucas, Joana Preiss) sitting in a diner. They order vegetarian food; only to find that meat has found its way onto Justine’s plate. She spits out the meat, and her mother is cross with the waitress over the blunder. The scene seems eerily pointless, but what it does is pave the way for the violently focused but turbulent narrative.

We next see Justine at her university campus: which is overrun with dastard orientation customs. The seniors conduct a number of ‘induction’ activities, the first of which is to demand that Justine and her classmates eat a rabbit’s raw kidney. She reluctantly does so, at the behest of her older sister (Ella Rumpf). The event seems to put Justine on a dangerous path, as her appetite for flesh grows exponentially, to the point that she actively seeks out the taste of human flesh.

Justine’s descent into cannibalism is twisted, jarring and in many ways repulsive to the ordinary viewer. The visceral and direct nature in which director Julia Ducournau portrays the action will cause some viewers to flee the cinema. But for the ones that remain, there is no doubt some odd sense of aliveness inspired in us. Justine’s frequent indulgences in human flesh are characterised by an unrelenting eagerness and fervency – only augmented by the colourful visual palette and hypnotic shakiness of the camera. The scenes are viscerally engaging for us, even if they sometimes lack the psychological depth that they so ardently profess. 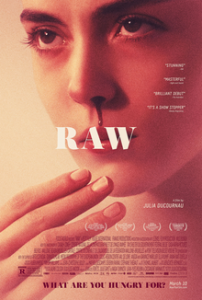 Ducournau’s deliberate weaving of details seems to hint at something psychologically complex: the fact that Justine is a vegetarian, the fact that she is studying to become a vet and the fact that her sister seems to have the same proclivities as her. Ducournau never gives us any psychological payoff. If anything, the violent, cannibalistic scenes further act to thwart her attempts at insight.

Probably the best way to view Raw is as an expression of the pressures of adolescent womanhood. Justine is not your quintessential teenage girl: she is shy, sexually inexperienced and seemingly interested only in her studies. As she starts her university life, these qualities are rebuked by the seniors, and the pressures to conform are overwhelming. In light of this, Justine’s cannibalistic tendencies are a cathartic, empowering rejection of the status quo.

Garance Marillier’s performance, in her first lead role, is remarkable. She knows exactly when and how to play Justine as a powerless, meek and quiet girl, and conversely when to dial it up with fury and voracity. Her ability to helm Raw is never in question, and it is indeed delightful to watch her oscillations between powerlessness and powerfulness. Marillier’s eye-catching performance goes some way in clarifying and expounding on the suffocating expectations faced by women.

For her debut film, Ducournau expresses an unmistakeable confidence. Her command over the visual action of the film is omnipresent, and the narrative tightly wound together. The polarising violence and horror, as well as the themes explored within the film, indicate a woman in total control of her work. Ducournau’s success with this film is only inflated in consideration that the horror genre is one typically dominated by men.

Despite a somewhat undermining conclusion, Raw is an artistically assertive film that never ceases to engage. Its ability to make the horror and cannibal genre feel fresh is certainly a highlight – and Marillier’s performance is not one to be missed.

Raw is in cinemas from 20th April through Monster Pictures.

Written By
Nick Bugeja
More from Nick Bugeja
There is no doubt that Martin Scorsese is most renowned for his Italian-American...
Read More