This is a cinematic jigsaw in which the pieces occasionally seem misshapen, as if the film is operating on a totally different level to the audience. There’s very little exposition or framing scenes. Sometimes Assayas just hands the audience one or two necessary details and then dares you to figure it out for yourself. At other times it feels like three totally different films staring Kristen Stewart have been edited together like some bizarre celluloid Human Centipede experiment for the arthouse community.

Reactions have been mixed. At its premiere at Cannes the film was met with scattered applause but overwhelmingly with ‘boos’* yet Assayas managed to walk out of Cannes brandishing the trophy for Best Director. Some critics have called this the best film of the year with five star reviews, others have said that the emperor has no clothes; it seems confusing and cold because it’s a ‘paper bag’ film (clean and crisp to look at but totally empty inside).

I was thoroughly flummoxed the first time I saw it at MIFF 2016. Seeing it that night was confusing, irritating and all-in-all not particularly enjoyable. Upon walking out I tweeted, as is my eternal duty being an inner city latte sipping Melbournian, that “A second watch of Personal Shopper is needed to figure out if it’s complex and profound or pretentious indecipherable claptrap”.

Well, the jury is in, that second watch has happened and the verdict? Personal Shopper is a great film. It’s one of the best rewatches I’ve ever had because a lot of the film’s coherence and depth rests upon knowing the tiny clues that Assayas has weaved into his minimalist but deceptively deep script. It’s a shame that it’s turned out like this, because Assayas has quite a lot to say about some large and varied topics but a fair percentage of the audience won’t get to enjoy this on the first viewing.

Above all, Personal Shopper is a ghost story. Our heroine Maureen is a medium (with a tattoo of an eye on her shoulder) whose twin brother was killed by a heart condition that she shares. A deal that they once made is the basis of the film; as mediums they pledged that the first to die would give the other a signal if there really is something on the other side. It’s an idea that a few other films have dealt with – predominately 1980’s The Ninth Configuration, directed and written by William Peter Blatty, who is most famous for his novel The Exorcist. 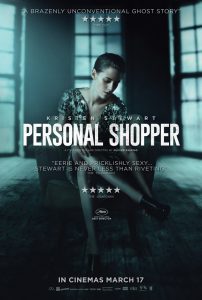 The eternal question ‘What happens when you die?’ might be the greatest question of all. Almost every film deals with this in a small way simply on the basis of being about people, each one a mortal soul who are all moving towards the same end. Structurally, Assayas demonstrates this by having most scenes fade to black; only at the very end does this change when the film ends by fading slowly into white.

The most famous dialogue in the English language: Hamlet’s ‘to be or not to be’ soliloquy even ponders it at one point:

“to grunt and sweat under a weary life,

but that the dread of something after death,

the undiscovered country, from whose bourn

It’s also a question which, paradoxically, is one of the most discussed but also the most dangerous. To paraphrase a quote from Peter Hitchens, once you assume that this universe and this life we’re all living had a creator and therefore an afterlife – this is the most dangerous idea, concept or thought that will ever be discussed. If this is the case, it changes every bit of human behaviour; our ideals, actions and responsibilities. The universe goes from being a meaningless chaos to being a place designed with some sort of grand plan, in which there is real justice and hope.

Your own opinion on this question will probably affect your experience with Personal Shopper. Like a lot of great films you get out what you bring to it, and writing as someone who has no faith or hope in a hereafter, this may have been one of the factors that soured it for me on first viewing. Seeing it again, it’s clear that Assayas isn’t leaning to either side. The audience is left to make up their own minds about it. Throughout the film it’s tempting to look for evidence of the supernatural, even when there’s a logical explanation for what happened.

Kristen Stewart’s career seems to have been fully resurrected from the crushing lows of the Twilight films. Her performance here is the best she’s ever delivered. It is intimate; she is in virtually every scene and she shows all of herself both physically and spiritually. It’s so good that it’s worth forgiving her endless habit of biting her lip and mumbling and her character’s annoying habit of frequently cracking open bottles of Stella Artois and not drinking them.

Personal Shopper is a film of many ideas, sections and places. It’s the kind of cinema which sticks like sap to your mind in the weeks after seeing it. It’s flawed but also one with a bastion of ideas which lurk just below the surface, like ghosts in our mortal realm.

*Being booed at Cannes is a very fickle thing and it’s better to take this piece of information with a very large pinch of salt. E.g. The following were all booed at their Cannes premiere: Tree of Life, Taxi Driver, Inglorious Basterds, and Pulp Fiction.

Written By
Simon Storey
More from Simon Storey
Schlocktober is upon us, bringing the promise of chilling thrills and bloody...
Read More