If you happened to hear about a circumnavigation of the globe by boat plane a bit over a year ago, there’s a good chance you know the circumnavigator didn’t really tell anyone. Flying solo around the world in a boat wasn’t the type of endeavour that inspired enough confidence in the man himself to ladle the weight of curiosity, expectation and worries on others. Regardless, he’s telling everyone now. He’s Michael Smith, aviation enthusiast and owner of the Sun Theatre in Yarraville.

Voyage of the Southern Sun is the first film produced in-house at the refurbished community cinema, and also marks the first feature length film directed by Robert Murphy – no, not the Bulldogs captain. This is the man who has been doing the Sun newsreels that are played prior to films in place of ads. (Though you’d be forgiven the confusion given the reel still running six months on from the event is the Bulldogs premiership celebrations). This is just one indication of the community-minded goals that Smith has brought to the Sun Theatre and Yarraville more broadly. It is an optimism that is infectious throughout Voyage.

You would think that taking a trip in the Southern Sun (his amphibious vehicle) around the globe might be at odds with these themes of cinema and community development, but you have to meet the man to know that this isn’t true. Indeed with Smith’s narration, this film functions variously as adventure, travelogue and character profile. It’s a trip global in scope but intrinsically local in the way he approaches his subjects. 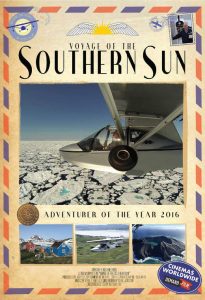 As a child, Michael Smith had been inspired by Dick Smith’s circumnavigation, and has since been inspired by a series of other things that might have compelled him to do something so outlandish. The Sun Theatre originally opened in 1938, a time of art deco decadence. This same time in history seems to have been pivotal for Smith, who reopened the theatre in 2003 after a five year project to refloat the boat, as it were. Also a keen aviation enthusiast, Smith was also conscious that the 30s gave birth to the first Qantas boat planes, which shrank the world to a mere eight day journey, opening the isolated Australian continent up to unprecedented accessibility, enabling places like the Sun Theatre to thrive.

Michael did his trip over the space of about seven months and it is something of a tribute to those transformational days. The flight plan would bring him face to face with the perils of the sky but also the maze of airport customs and administration, historic Qantas routes, dicey border crossings, global experiences of cinema, and an enviable tour of the Mississippi River. It’s a slight shame that a circumnavigation of the globe only takes a roughly straight line because if, in addition to this stunning compilation of landscapes and pluming cloud formations, we were to add the plains of Africa and the length of the Andes, we could have kept going another twenty minutes. But that’s being picky.

Upon a mere blurb reading, it might seem as though this is one more ego-driven pursuit of one of a dwindling number of adventurer firsts. But while climbing Everest or sailing the world proposes predictable catalogues of challenges, a mostly relaxed aerial tour of the scenery allows the focus to stray from tales of frostbite and toilet woes and lays bare the contrasts of the world. Smith’s curiosity and eye for a view ensure that this is rarely regulation box-ticking tourism, particularly when we get to the Aleutian Islands.

Look past the budget. Indeed devoid of commentary this is mostly a narrated slideshow spliced with a running interview with Smith, but this was never trying to be a David Attenborough-level nature documentary. What works is a narrator who is both an avid storyteller and who knows when to take a photo and when to put away the camera and say hello.

Just as the Sun Theatre has taken a community minded approach to its cinematic responsibilities, Smith is always inherently interested in how this sense of community is cultivated around the world, particularly through cinemas – whether it be the roving cinema the Sun operates throughout Papua New Guinea, a price-tiered drive-in cinema in India, a Michael Moore-operated theatre in northern USA or the slowly crumbling remains of a cinema on a remote Alaskan island. In that spirit, this documentary celebrates what the Sun is trying to do in Yarraville, even picking up a few ideas along the way, and it’s heartening to hear those values spelled out in such grand terms.

If, like me prior to this screening, you haven’t been to the Yarraville’s Sun Theatre, this is as good a chance as any to do so.

Voyage of the Southern Sun screens from 12th April at the Sun Theatre, Yarraville, through Spectre Films.