Australian cinema can now lay claim on having made its own version of Boyhood. In 2009 Aaron Petersen began the ten year journey of recording the young life of Zach Doomadgee, an indigenous boy of ten living in Sydney with his father Alec.

This is a documentary of the formative years of Zach’s life, as he goes from a wide-eyed boy living in the shadow of his staunch and proud father, to the dark places he goes to in his teens as his experiments with drug and alcohol push their relationship to the brink. Finally we get to bare witness to Zach’s entry into manhood as he takes part in ceremony – a tradition of his people which has initiated boys to men for over a thousand generations.

The genesis of this film lies with Petersen and Alec Doomadgee, who originally wanted to make a film about Alec’s split between lives and cultures. Alec was a star of the ABC’s Redfern Now as well as being a well respected activist in the indigenous community. His time was divided between his acting job is Sydney and going back to his native community in the very rural NT. This idea was shifted because Alec had an even better film to share – that of his son who was about to go through that most confusing part of life: growing up. 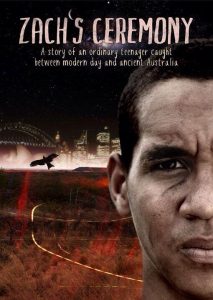 Zach’s Ceremony is many things. It’s partly a meditation on the complications of going through adolescence.  It’s a little history lesson about the atrocious race relations that factor time and again in Australian history. It’s a story about a unique young man who is looking for a place in this world among all the dangers that lurk around. And it’s the story of a tempestuous father-son relationship which manages to weather the odds. Above all, this is an excellent, very moving documentary which manages to address many things and does every single one of them well.

Not least of which is making the viewer try to appreciate what the lives of our indigenous brethren must be like. The oldest continuing culture in the history of the world has existed for millennia. It survived first contact with white men, colonisation, the frontier wars, systemic alienation, oppression, and openly racist government policy in the land they toiled to care for for longer that it’s possible to credibly imagine.

This is still a hazy area, especially when utter garbage like Bill Leak’s infamous cartoon is spread across the nation’s tabloids. These proud people are being kept alive by the passing down of culture and a community which has survived the odds. Zach’s Ceremony is a perfect example of the importance that knowledge bestows on us all, and as the very moving final message proudly asserts – “the knowledge continues”.

Making the transition from boy to man is difficult even for the most privileged amongst us. To take that journey alongside the challenge of finding your place in a culture that has existed continuously for 60,000 years must be something else entirely. If you get the chance to experience the journey that Aaron Petersen and the Doomadgee boys have documented then make sure you take it. Zach’s Ceremony is a rare and important gift to the cinematic world which should be witnessed by as many Australians as possible.