Just for a second let’s put to one side the claims of whitewashing that have dogged Rupert Sanders’ Hollywood reboot of Ghost in the Shell. You’ve already formed your opinion on that casting decision, so instead let’s turn to whether it was worth the effort.

By now you would be forgiven for thinking Scarlett Johansson is in danger of typecasting herself: Black Widow, Lucy, that thing from outer space in Under the Skin, and now this – a cutting-edge cyborg designed with an eye to anatomical perfection. Johansson is always an engaging screen presence, and for this role her airbrushed features and muted persona, whether rightly cast or not, are suitably robotic. Moreover the look of constant inscrutability, or perhaps curiosity, suggests she is never far from breaking out of the chains of her coded existence.

In a world inhabited by humans, this type of curiosity is only to be expected of someone frequently reminded of how uniquely different and artificial she is by conception. Now called the Major – her brain having been transplanted into her artificial body after a near-fatal accident – she works for a shady covert government intelligence unit. Her creator (Juliette Binoche) sees her as a thing of beauty and represents her most interesting and emotionally committed relationship. However, this is at odds with hard-edged Hanka Robotics boss Mr Cutter (Peter Ferdinando), who ultimately has final say over what the Major’s real purpose is. She is a weapon, and works under the guidance of Aramaki (an impressive turn from Takeshi Kitano), a controller who is strangely the odd one out in this Asian metropolis in that he speaks Japanese among a host of English speakers. Major’s biggest challenge is one of memory. She remembers fragments, but in the search to find her true pre-robot identity, her path leads to a serial brain-hacker called Kuze (Michael Pitt), whose pursuit of Hanka collaborators has left a bloody trail. 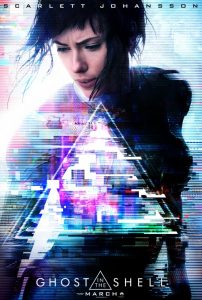 It would be a shame to disregard all efforts because of a few casting decisions, and indeed the cultural melting pot of the metropolis does lend itself to diversity. However, the predominating western presence can’t avoid a few awkward moments in the Hollywood translation, and the ethnic range in the crime-fighting team appears more tokenistic than for any claim to narrative propulsion.

Visually this reincarnation of Masamune Shirow’s 1989 comic and Mamoru Oshii’s much-lauded 1995 animated film is consistently very good and, if it were an independent creation, it might have drawn wider applause. But Hollywood remakes are always an interesting exercise in boiling down what studios think is essentially the appeal of the original. In this case Sanders’ treatment and the signposting script (by Jamie Moss and William Wheeler) do the original an injustice in assuming the action was the principal drawcard, at the expense of the noir mood of the original.

At times when you want the script to soar and build on the relationships that define Major – most significantly with Binoche’s character – Ghost in the Shell resorts to Hollywood themes of justice and sacrifice, preventing the tension of implicit moral conundrums from rippling as required. Johansson has the experience for the role and might have pulled it off better in a different context, but in the hyper-real setting, Major at times comes across as a mere 2D martyr that could have been much more fleshed out. But then fleshing out is often the trouble with robots, and perhaps it was the lack of development of the surrounding cast that has left this story a little threadbare.

To be sure, this was a dazzling experience, a rare example of 3D being used to advantage rather than intruding on the spectacle. The original film’s grey palate has been upgraded with lurid verve courtesy of Peter Jackson’s Weta workshop. And the updated setting, in seeking to honour the old cyberpunk vision while also aiming to set its own benchmark complete with roving holograms that enrich a gritty and stylish backdrop, is truly stunning. A pulsing soundtrack from Clint Mansell and Lorne Balfe is also perfectly tailored.

However, perhaps it is the curse of a studio seeing an opportunity 20 years late that people unfamiliar until now with Ghost might dismiss it due to its similarity to other classics of the tech anxiety catalogue: The Matrix, Total Recall and particularly Blade Runner. The manga comics for Ghost in the Shell might well promise their own unique narrative arc, but here the tendency is towards watered-down imitation with more emphasis on visual candy, and unfortunately this probably doesn’t do enough to merit the financial risk of a longer franchise.

Ghost in the Shell is in cinemas from 30th March through Paramount Pictures.

Written By
Angus Tonkin
More from Angus Tonkin
The Lavazza Italian Film Festival is upon us again. For those of...
Read More