The new Lego film, The LEGO Batman Movie certainly looks like Lego, but it doesn’t feel like  the bright, bold bricks we love from our childhood. The marrying together of Lego and Batman has a history for over ten years in playsets and video games. This has proved itself as successful and the right thing to do for any fan who loves being a kid. Batman also starred in the The Lego Movie, but as it turns out has to carry his own Lego movie feature.

Looking at a pretty ‘awesome’ depiction of childhood and creativity, generally The Lego Movie  got things right. However, according to some fans in the documentary, A Lego Brickumentary, enthusiasts at the time were critical over The Lego Movie. In their eyes the use of employing CGI over stop motion animation was a big no-no, a sell out, since these fans were making their own versions with totally handcrafted scenarios.

Likewise, if you’ve played any Lego franchise video games, you know you never ‘rage-quit’ like you would with any other game. It is too funny, especially when you experience death. The mini fig falls apart and soon enough is able to whirlwind back to its original identity. It is cute and a reminder of how many pieces do make up these creations and that it is based on a real toy and our real experiences. 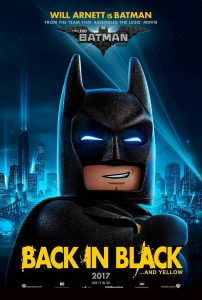 Taking the idea of authenticity and playfulness from the brand, it is hard to go into The LEGO Batman Movie and find exactly what you might expect, or even know what they are aiming for. It’s a smorgasbord of identities and postmodern puns. The universe isn’t filled with the familiar awkwardness of the Lego bricks but rather basic superhero movie tropes and Batman references galore. It therefore lacks the whimsy of what the brand means. Perhaps it’s a metaphor of how tiresome Batman has become over the years.

In this edition further pop culture identities are leveraged. Parks and Recreation‘s Chris Pratt has been replaced as the lead with a sore throat-gravelly Will Arnett as Bruce Wayne, along with a campy Robin voiced by another Arrested Development actor, Michael Cera. Also to add some gender diversity, we have a tough-but-kiddy-friendly Batgirl, Rosario Dawson.

This movie is the first textual Lego piece, which might be considered as restricted. From the toy side of things, you don’t get any of these ‘lol’ moments which rely on a connection with the toy. No moments of the mini figs showing their inherited awkwardness, or restricted facial expressions. From the Batman side of things however, there are many, many references to the franchise history, and a much clearer sounding Bane, which is a great improvement on Tom Hardy.

Maybe this is too soon after Batman V Superman:Dawn of Justice, but this Lego cross-promotion does bring a new audience, or certainly seeks one, yet it feels like McDonaldisation. Don’t be surprised if it doesn’t come with a free toy. It feels rather like force-feeding nostalgia down our throats.

The LEGO Batman Movie is not a sequel to The Lego Movie but somehow a continuation in a Lego-verse, a mash-up of other fictional worlds. This feels like a definite bums on seats fanboy/fangirl cash-in. Besides the fact that there’s already a Batman video game and Batman Lego toys to collect, you ask yourself, what is this offering us and do we now need to prepare for Lego as a genre? It poses interesting questions as to where the Lego brand will go with cross platforming and if it can maintain the brand’s heritage and integrity.

The LEGO Batman Movie is in cinemas from 30th March through Roadshow Films. Read our review here.