Nearly everyone had to have been pleasantly surprised by Phil Lord and Christopher Miller’s The LEGO Movie a few years ago. The jokes were sharp, the imagination of youth was infectious, and Chris Pratt’s gloriously normal hero made for a charming and original adventure. It also created a novel break from the rubbery sheen of modern animation. Batman stole the show in that film, so the reception of Chris McKay’s LEGO Batman Movie has been brimming with welcome anticipation. Sadly it seems that bar of expectation has been set just a little too high.

If you know the Batman comics well, then you know half the story already, because this is less LEGO Movie than DC Comics spoof. Bruce Wayne (voiced again by Will Arnett) lives the party-boy lifestyle we’ve come to expect. He laps up the praise from being Gotham’s dark knight. But what no-one but Alfred the butler (Ralph Fiennes) knows is that this charade hides a troubled existence springing from his parents’ murder. But this reality is about to be uprooted when he inadvertently contracts an orphan sidekick, Robin (Michael Cera) and develops some confusing feelings for the new commissioner Barbara Gordon (Rosario Dawson). Perhaps even more pressing is a plan by an offended Joker (Zach Galifianakis) to annihilate Gotham, after Batman refuses to acknowledge the Joker as his greatest enemy. 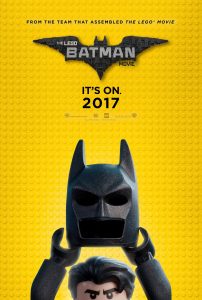 If we are to take the idea that a great movie needs an even greater villain, then surely no production – except perhaps The Cabin in the Woods – surpasses LEGO Batman for effort through sheer weight of numbers. Having the LEGO brand has allowed this franchise to rip off nearly every half-successful fantasy and sci-fi franchise ever conceived. It’s a bold and chaotic move, but in a way it works, reflecting to an extent the child’s LEGO board, where any and every combination of worlds is possible. As a result the animation is again inventive and lively, though the fact that the screenwriters have fashioned a story that barely acknowledges the human maker – as its predecessor did – is a pity. The side effect of this is to render the LEGO aesthetic more of a curious visual gimmick than a significant plot point.

The same chaotic approach has been used in the writing process, with gags flying with abandon at the DC Comics universe and the Batman legacy right from the opening credits, which are accompanied by a live commentary by Arnett. This willingness to make a joke of even the most mundane parts of the film works in that instance but, for better or worse, it is also indicative of the cluster-bomb approach to comedy taken throughout. That the inconsistent and overly self-referential script is the result of a newsroom’s worth of screenwriting credits – Seth Grahame-Smith, Chris McKenna, Erik Sommers, Jared Stern, and John Whittington – is hardly surprising, and it’s part of the reason LEGO Batman doesn’t quite click.

Like many 90s kids, sometimes it’s as if my world is viewed through a yellow prism of Simpsons trivia. So it was when Batman was singing his own theme tune in the opening scene or attempting to beatbox at numerous other points, that my mind turned to Poochie. Remember that rapping dog that Itchy and Scratchy couldn’t find room for in their murder sessions? Granted Batman’s lyrics are wittier and meant as a joke on him being some kind of Chuck Norris character, but like Poochie these scenes saw Batman outlast his welcome. Try as I might, I just couldn’t quite muster a chuckle for the 10th or 11th times he made a joke about his abs.

To be sure, there are many laughs to be had here and it will doubtless please many and most kids, but don’t expect a repeat of the original’s charms.

The LEGO Batman Movie is in cinemas from 30th March through Roadshow Films.

Written By
Angus Tonkin
More from Angus Tonkin
Not to recommend Wikipedia as a trustworthy source, but a quick search...
Read More