Around the time of International Women’s Day, this Australian release is rather perfectly timed. Documentary The Eagle Huntress, directed by Otto Bell, narrated by Daisy Ridley, and ending with Sia’s “Angel by the Wings”, is all girl power. This is Bell’s first feature, and strategic or not, this subject matter along with thirteen-year-old girl Aisholpan Nurgaiv form a storyline that must be applauded.

Eagle hunting is a tradition of past generations and a ritual amongst Mongolian culture; those who go hunting for golden eagles are a special few. Holding onto the eaglet (the young eagle)  is the start of a bond between the human and eagle for seven years, after which the bird must be released into the wild to complete their circle of life. Her father’s mentorship (Rys Nurgaiv) is the first of a female, and Aisholpan is the youngest to enter the annual Golden Eagle Competition.

Situating itself in the Altai Mountains in Mongolia, the vast scenery in The Eagle Huntress is breathtaking. It’s something that almost needs to be experienced at IMAX. In saying that, this documentary feels like those National Geographic features that were once a product to show off extreme ratios, along with some spiritual infused background music, inducing your senses. The Eagle Huntress has this quality, but it works nonetheless, and it does not feel like a cliché. 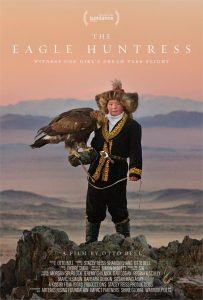 The exploration of Mongolian culture, through the main topic of eagle hunting – which has been passed down by generations of men – is still regarded as exclusively male. The colourfully dressed men that make this rebuttal and don’t respond well to the first female entering the competition – although a little funny at times (it is hard to know if this translation is intended or not) – represent that these inequalities can be found in every culture. Their attitude  to this rather positive progress for women really stands out as the subtext of the doco.

When subtitles don’t need to be read, occasional Ridley reminds us she is the narrator and has a really English accent. It does fill in the history a little, but works against the natural, seemless quality of Bell’s handle and gets a little ‘white saviour’ in the way of what is already expressed and realised.

But one other thing about The Eagle Huntress is that it doesn’t feel a documentary at all, but an exploration. It it surreal to know this is a true story that was captured as it unfolded. Never overstaying its welcome, the camera positions itself and follows the culture and beauty of the eagles. It makes you feel part of the rich landscape and also lets you know this  bewildering, massive landscape can never be conquered.

The chance to get to know these birds, who are usually feared, is more marvellous and personable than imaginable; it is usually not presented as such. It offers something different to a Sir David Attenborough presentation, whereby species are introduced in their most natural habitat. Bell brings these animals into domestic environments, allowing you to look at them as you would with a cat or dog, and you will personally want to ruffle their feathers.

Not forgetting the energy and determination for gender, Rys, Aisholpan and her golden eagle make this a soulful journey.

The Eagle Huntress is in cinemas from 16th March through Sony Pictures.