For such a poignant topic, it seems cheap to employ a pun to describe a film called Loving, yet that is the word that first comes to mind as the credits roll. Recalling the landmark court case Loving v. Virginia in which a quiet couple took on the state of Virginia over inter-racial marriage and won, Jeff Nichols has created a heartfelt ode to that struggle. Anyone can read a court transcript and hear the arguments for and against, but the fresh air here is in Nichols’ attention to the human side of this legal milestone. The struggle, it seemed, wasn’t as much in the court room as it was at home. It was convincing the Lovings that, instead of them giving way for the law, the law could give way to them.

At first life in the rural Virginia had seemed untroubled for Richard (Joel Edgerton) and Mildred (a brilliant Ruth Negga). To all their friends and family, their relationship was common knowledge, but marriage was a step too far. Even with Ruth pregnant and supporting goodwill among friends and family, it seemed nothing could protect them from the state’s stance against inter-racial marriage. The same horrible sentiment kept coming back to them. They should have expected it from the sheriff (Martin Csokas), but more upsetting was the bitterness arising within their own families: ‘You should’ve known better’. Hauled before the district judge, the choice was theirs: prison or exile. Exile was the only immediate option, but family is too strong a bond to let an unjust law keep anyone separated from their home turf. 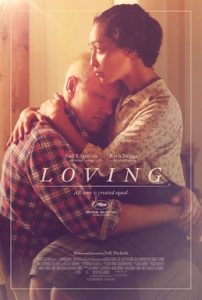 As far as heroes go, they don’t get much more reserved than Richard and Mildred. These were not activists, but rather incidental players. What Nichols’ narrative reveals is the shyness of a family who wanted nothing to do with history; family was all that mattered. Not taking anything away from the young lawyers who negotiated their way through the Supreme Court, but it is this simple chemistry between Negga’s overwhelmed but hopeful Mildred and Edgerton’s honest but withdrawn Richard that is most powerful in reminding us of what was at stake. The lawyers wanted history; the Lovings wanted home. This may say something for Nichols’ choice to cast comedian Nick Kroll as their legal representation Bernie Cohen, casting a lighter note over the legal proceedings and indicating a bigger battle elsewhere, and it makes for a nice balance, even if Kroll’s curling smile can seem confusingly malevolent at times. Michael Shannon, a long-time collaborator with Nichols, also plays a small but delightful cameo as a magazine journalist with an endearing compassion for his subjects, supplementing a gentle vein of humour that runs through the film.

This is another impressive addition to Nichols’ catalogue, as he evokes the familiarity of the landscape with a masterful use of sound and light, and uses the stagnant wide shot to particularly good effect. The lingering image of Richard and Mildred lost and apart on the local courthouse steps is a scene that requires no words to demonstrate the bewildering sense of the unknown.

If there is a criticism, it may be its running time which, at two hours, could have used a trim. The slow pace is in keeping with the leads’ quiet, steady natures, but shots of locking eyes and cementing bricks can become repetitive in a narrative with a forgone conclusion. However, this is a minor peeve. Loving lacks the energy and triumphal note that will give it the mainstream appeal of something like Hidden Figures, but this is a beautiful and understated film that is as relevant as ever to the race relations and marriage equality debates, aided by stellar performances from Edgerton and particularly Negga.

Loving is in cinemas from 16th March through Entertainment One.

Written By
Angus Tonkin
More from Angus Tonkin
From the opening act, Red Sparrow marks itself as a film bathed in studio...
Read More