Remember that day when At the Movies finished on television and there was no more David and Margaret? It left a dark hole indeed. Their absence may never be filled, but in Sally Aitken’s latest documentary on David Stratton, we are reminded of his importance to the Australian film industry and to us, the viewers.

David Stratton: A Cinematic Life is joyous and exactly how you would expect a documentary to convey David’s love of cinema. Don’t expect handheld camera work (which David was not fond of), but do expect the anecdotes and familiar faces of the Australian film industry.

UK born, with parents and a younger brother Roger, who have no interest in cinema whatsoever, David found love in the Australian landscape and the opportunities it provided. A black sheep of the family indeed, he can count something like 25,254 films he has seen and mostly reviewed. 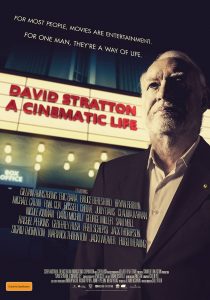 In short, this documentary shows David’s beginnings as a writer for Variety and a backer of Australian Cinema. Changing the outcome of his future, the opportunity of directing the Sydney Film Festival in 1966 meant not returning to run his father’s business in the UK, and he continued in this role this until 1982. Bringing foreign films to the shores and displaying his dislike of censorship, he emerged on SBS in 1986 with those big frames and a gruff beard and spent nearly three decades with Margaret Pomeranz arguing and keeping us up to date on the latest releases.

The film is a passionate journey capturing David’s struggles and connection to the landscape, particularly through the character, the tourist. When this archetype arrived into the ‘outback’, they were thrown into unfamiliar colloquiums and had to develop a relationship with beer and mateship. Films like They’re a Weird Mob and Wake In Fright connected David to Australia and the darker hidden truths that go hand in hand with being a  foreigner. It may be trivial stuff, but you can also see our sardonic relationship with likeable serial killers, Chopper (Eric Bana), Pando, Bryan Brown’s fatherly character in Two Hands or even Mick, John Jarratt‘s sadistic killer in Wolf Creek. They’re all unquestionably Australian.

There are loads of examples in this documentary and it does feel a bit like taking a class in cinema studies 101. However you still get a taste of the real David. Personal moments are emphasised through the seemless editing with excerpts of his favorite films including Picnic at Hanging Rock, Mad Max and Muriel’s Wedding. The black sheep motif is used to critique Muriel (Toni Collette) and Rhonda (Rachel Griffths) from Muriel’s Wedding and it’s really David himself. His analysis is funny and at the same time meloncholic, showing how important these characters are and how they have given a new perspective and avenue for outsiders to connect to.

For cinemagoers this is an appreciative piece on the man himself. Expect to laugh hysterically and shed some tears. These are tears mainly of joy, but it’s not without its personal battles and more serious tones. David Stratton: A Cinematic Life emphasises the power of film, and the message is to explore as much Australian cinema as you can. But it also looks at the need to continue to revaluate our relationship with the land. It is a nice reminder that film is not just a medium, but to many, it is everything.

David Stratton: A Cinematic Life is in selected cinemas from 9th March through Transmission Films.