Desolate and stark, Logan is a superhero flick unlike many others. In fact with its hues of yellow, harsh landscapes, and slow burning character focus, it’s more akin to a great western. Scrap that – this is a great western. Logan is the perennial gun slinger; down on his luck with only a few metaphoric bullets left in the chamber, he is driven by morality to take down one last bad guy.

The supposedly indestructible Wolverine is now aged and battle scarred. The hero as we knew him in X-Men films of past is gone, leaving director James Mangold and Hugh Jackman freedom to take Logan in a bleaker and frankly more interesting direction. In addition to this is the artistic license accompanying an MA15+ feature (and it’s worth noting that Jackman has taken a pay cut to ensure this rating). The starkest difference with the mature classification is the graphic violence. No longer do whirlwinds of punches leave behind unscathed bodies. Backed into a corner Logan now leaves a trail of blood with gnarly skull impaling and even some decapitations. 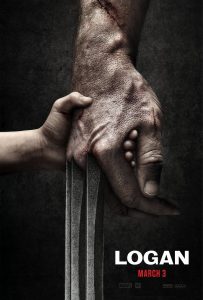 Novelty of blood and guts aside, the best thing to come with an MA15+ rating (R in the US) is a sophisticated story. In a near future of rusted steel and worn brick, Logan is self-charged with nursing a visibly senile Professor Xavier (Patrick Stewart) who is hidden near the Mexican border. Xavier is suffering seizures which have potentially fatal consequences for mutant or man nearby; he is officially classified a WMD. Only Logan with his unique healing abilities is somewhat resilient. Left intriguingly partially explained is the fact no new mutants are being born and most of the mutants are now no more. Compounding this tempestuous situation is Logan’s ailing health. In an ironic twist of fate he is being slowly poisoned by the same adamantium that has previously made him so invincible.

In terms of plot this may not be the most exciting story put to paper. Indeed, after a fresh, interesting beginning the film can lull at times, hindered mostly by two-dimensional bad guys. As a swan song to both Logan and Hugh Jackman though, it is a perfect choice of screenplay. Jackman has the freedom to deliver a brusque, taciturn, and at times tender, emotional performance.

Jackman and Logan are now synonymous, evidenced by the whopping nine appearances Jackman has had as The Wolverine. Much can be said of what makes Logan such an interesting character. His puissant superpowers combine beguilingly with his gruff loner who uses alcohol as a coping mechanism. It is likewise enjoyable that the withdrawn masculine outcast is portrayed so masterfully by his own inverse – the affable Aussie Hugh Jackman, who is held in high local and global regard. With it’s melancholic western tone and an eerie finality that ebbs and builds over the length of the film, this final performance from Hugh-verine is the perfect tribute to both character and actor.

Logan is in cinemas from 2nd March through 20th Century Fox.