Coming twenty years after the original cult classic, T2 is carefully considered, biding it’s time to lampoon us when we most need it and least expect it. The film picks up with Renton (Ewan McGregor) returning to Scotland to reunite with old pals Spud (Ewen Bremner) and Sick Boy (Jonny Lee Miller). Here I must confess the last time I can recall seeing these characters would be roughly seven years ago. Yet almost immediately I found belly laughter rising at their idiosyncratic natures.

The relationships are authentic and engaging, in particular Renton and Sick Boy whose self-absorption and selfishness balance out with a mutual bitter resolve to life that saves them from implosion. Gas lighting their competition is the introduction of  love interest Veronika (Anjela Nedyalkova). With her character comes the only qualm of the film. Used as a metaphor her character is a clever foil – countering the films nihilistic themes when she performs a carpe diem-esque act of grandeur. As a love interest though her charcter falls flat with clichés. Her disengaged European sensibilities don’t translate to intrigue; it’s been done to death by now. 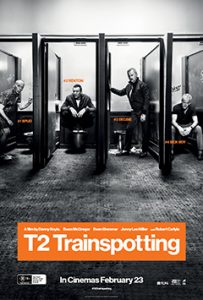 The only charcter not yet mentioned supplies perhaps the most humour and definitely all the tension for the length of the film. Looming over the film is the sword of Damocles himself: Frank Begbie. Robert Carlyle deserves high praise for bringing to life the most absurdist, horrifying and hilarious character since Malcolm McDowell’s Alex from A ClockWork Orange.

Ask what people most remember of the original besides the characters and the answer will probably be the music. Boyle once again nails the film score with a mix of nostalgic classics and contemporary tunes that will test your resolve to shazam now or google later. Much the same way Boyle teases out nostalgia with his characters, he likewise tortuously teases out the opening notes to ‘Born Slippy’ once or twice. Never fully playing out the full counter cultural anthem he himself made famous can be seen as a metaphor for T2 itself paying homage to, but not relying on, the original film. Finishing the movie with an off the hook Prodigy remix of ‘Lust for Life’, the final scene is perhaps the most memorable of the film.

Boyle is forever framing shots in original places, dragging us into the entrancing world of Renton and his friends. He is clearly conscious of the pitfalls for sequels and navigates them expertly. Is T2 original? Hell no! It doesn’t pretend to be. It is a continuation, simultaneously transposing the same comedic nihilistic lense to look at the absurdity of our modern lives and addictions. You may not be a drug addict but no smack addict is shooting up as much as you log onto Facebook.

T2: Trainspotting is in cinemas from 23rd February through Sony Pictures.