The setting is the final day of a lower class public high school, the stars are Charlie Day and Ice Cube, the jokes are crude, the morals are loose and the result – One of the most wretchedly dreadful films of this year if not this decade.

Andy (Charlie Day) is an English teacher. On the day that the school has scheduled budget cuts which includes letting go of staff and gutting the funding for little things like DVD players and coffee machines for the staff room, he witnesses history teacher Strickland (who has a reputation for being strict – see what they did there) deciding to discipline one of the misbehaving students by getting a fireman’s axe and imbedding it Shining style into the student’s desk.

In front of the school’s cranky principal (Dean Norris) Andy, who is trying desperately to keep his job and provide for his heavily pregnant wife, rats on Strickland which gets him fired. Unfortunately he’s done this to the wrong man. This isn’t just any history teacher, this is a history teacher played by Ice Cube; the rapper-turned-actor raised on the mean streets of L.A with a beard as black as the abyss and a scowl which looks like it could kill a man. The stage is set. When the school day comes to an end Strickland is going to go toe-to-toe with Andy and settle their differences “like real men” with a good old fashioned fist fight.

Okay. Where to possibly start with the mountainous challenge of trying to put into words how bad Fist Fight is. Mainstream Hollywood comedy isn’t great at the best of times with the crass jokes, bad stories and lack of script. The Hangover trilogy and its many knock offs aren’t exactly films in the sense that there’s no filmmaking employed to create them; they’re more like lightly edited improv with a glitzy filter over the top to give the semblance of story and character.

This is where Fist Fight’s problems begin. Even though it’s working within the framework of being a loose remake of 1987’s Three O’Clock High at least 70% of the film seems improvised by actors whose best material is either pop culture references or being gross. Yes: humour is subjective and yes there will be plenty of fifteen-year-olds who will chortle themselves hoarse at the embarrassingly juvenile humour presented here, but the fact that the film isn’t funny is the least of its problems. 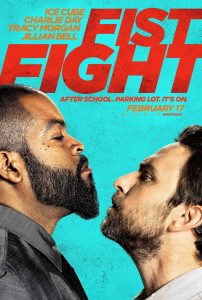 Performances across the board are awful. Everyone is going around on auto-pilot trying to quickly think of a punch line. Ice Cube isn’t too bad though, because he seems to just be playing Ice Cube. Editing is boring and staged, the story is pathetic, and the product placement for Apple is blatant.

To call this adolescent humour is to do a disservice to adolescents. Potty humour and bad words can be hilarious in the right circumstances but Fist Fight goes right up to wherever the line of sensible jokes is and then gleefully jumps over it. The school’s guidance counsellor played by Jillian Bell is the loudest example – openly discussing her use of meth is bad enough but the truly despicable path the film walks down are constant remarks about her desire to sleep with students e.g. “One day they’re eighteen and you can fuck them!” The jokes wouldn’t be so bad if this didn’t end up happening in the final scenes when Bell’s character finally begins a hook up with one. That’s right – it’s a film content with joking about and then celebrating statutory rape.

Above all, it’s the mentality that being nasty is funny which is so sad and worrying. This is the kind of film that teenagers across the world are going to see and this is the example being set? Think of what a film written by toxic Youtube comments might look and sound like and that mental image likely looks like Fist Fight.

Director Richie Keen has done a lot of directing work on television, including eleven episodes of It’s Always Sunny in Philadelphia so I guess that explains Charlie Day’s presence in the film because his acting talent sure doesn’t. What attracted him to this project isn’t clear but it seems that he deserves the rake over the coals, although Charlie Day and Ice Cube both have executive producer credits so they get some flack too.

The only two shining embers in the icy tundra of unforgivably awful jokes and disgusting morals (and I stress they are the only ones) are firstly the messages about the underfunding of US public schools which is indicative of the system of gentrification, and secondly the presence of Christina Hendricks and Dean Norris, actors of esteem who deserve a lot better than this shambles.

The clichéd line ‘avoid like the plague’ comes to mind in this circumstance but it really doesn’t carry the same weight as it used to. Avoid it like you would avoid one of the zombies from The Walking Dead shambling towards you with vials of smallpox in one hand and a fistful of shit in the other. Avoid it like it’s a member of Reclaim Australia with swastika tattoos on his eyeballs sprinting towards you while screaming about halal certification. Avoid it like you’d avoid earnest looking university students with clipboards approaching you in the street asking if you believe in the healing powers of Jesus Christ. But in all seriousness: don’t see this film. Don’t give the sad individuals who made it a single cent of your hard earned cash. It only encourages Hollywood and the entertainment industry as a whole to make more disgustingly inept films such as this. The question that floated around my mind as I left the cinema was how did we, as a society, get to the stage when films like this are not only given the green light to be produced, but are marketed and distributed by the most powerful entertainment industry in the world? The mind boggles.

If I wasn’t reviewing this film I would have exited half way through out of sheer contempt. It is one of the saddest cinema experiences this critic has ever had and if Fist Fight isn’t the worst film that comes out in 2017 we’re in for a truly wretched year at the multiplex.

Fist Fight is in cinemas from 16th February through Roadshow Films.

Written By
Simon Storey
More from Simon Storey
Horror as a genre has weathered every change that filmmaking movements and...
Read More