The current fascination with American race relations continues like never before in Oscar season 2017. The pallid white-fest of the previous years climaxed famously with last year’s #OscarsSoWhite outrage, inadvertently leading to Chris Rock calling the Oscars racist during his opening monologue. You know there’s a problem when an awards show as deeply up its own arse as the Academy Awards is has to call itself out on stage. For a great indicator of how Hollywood wants to distance itself from this rather bleached image look no further than the line up this year with nominations for six black actors and nine nonwhite centred films and documentaries.

Hidden Figures, or as Michael Keaton accidentally called it “Hidden Fences”, takes up three of these nominations. The second feature film of Theodore Melfi after 2014’s St. Vincent is a well intentioned biopic of three African American women who worked at NASA at the height of the Space Race. In 1961 Katherine Goble-Johnson (Taraji P. Henson) was a mathematician, essentially a ‘human computer’, working in the research department of NASA. She was incredibly good at what she did, but her lifelong inability to be white and a man meant that she had gone as far as any person of her creed could go. Alongside her were supervisor and mathematician Dorothy Vaughan (Octavia Spencer) and aspiring engineer Mary Jackson (Janelle Monáe). As the USSR managed to embarrass the USA again and again in the Space Race by getting a satellite and then a man in space before anyone else, NASA had to think quickly about how they were going to catch up. Luckily they had three of the best assets hidden away in the coloured section of the building.

If you’ve seen the trailer or have any knowledge of Hollywood biopics you know exactly what kind of film Hidden Figures is going to be. It’s an unsubtle and well meaning trip back to the bad old days of segregation – essentially the state of apartheid which existed in the South under Jim Crowe laws – complete with white saviour figures and a catchy soundtrack by Pharrell Williams. 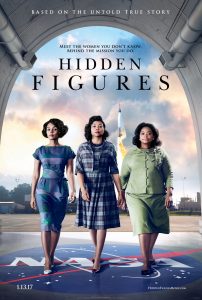 Performances are all quite good, leading lady Taraji P. Henson in particular is excellent and it’s interesting to note that Octavia Spencer got a nomination over her. This seems like an odd choice since Spencer seems to just be playing the sassy role she always plays. Kirsten Dunst as a steely eyed supervisor is quite good, sharing one of the film’s most insightful scenes with Spencer and seeing Jim Parsons play against type as the closest thing the film has to a villain was a pleasant surprise.

In any film which explores race, the meme of a white saviour is an aspect that needs addressing. While the film does have Kevin Costner playing this exact archetype, overall it champions our trio above all else so it gets a pass on this front, especially since there’s plenty of examples of it going completely wrong. Prominently The Help – the film equivalent of being repeatedly slapped while someone is shouting “RACISM. IS. BAD!”. In The Help’s case, it wanted to tell the dark tale of black suppression but ended up making a film championing the white person that helped. Thankfully that aspect is kept to a bare minimum here.

This is empowerment cinema at its most commercial and easily digestible. It explores a fascinating period in recent history and tackles it from an angle that very few of us would have known about, but goes about it with a rather rose coloured look. For example, no one is smoking, and a scene of Costner’s character taking a sledge hammer to the sign that says ‘colored’ over the bathroom is a great scene but is nothing more than fiction dreamed up by the screenwriters Theodore Melfi and Allison Schroeder.

Hidden Figures is an Oscar film by the numbers. There’s empowerment of a minority, race relations boiled down to its simplest form, and a scene where someone delivers a powerful speech in the middle of a room with everyone staring at them. But having the Oscar Bait label doesn’t always have to be a bad thing.

Something as powerful, complicated and important as race, especially in the United States, needs to be openly discussed and it’s films like this that push this issue back into the mainstream. It’s lovely to note that Hidden Figures has enjoyed an incredibly successful run at the US box office. People should know these stories and thankfully there’s considerable support for them. After #OscarsSoWhite last year, the perfect antidote is a groundswell of support behind a film lead by three females of colour reclaiming their place in history. Bravo.

Hidden Figures is in cinemas from 16th February through 20th Century Fox.

Written By
Simon Storey
More from Simon Storey
Alongside Charlie Chaplin’s persona as the Tramp and Buster Keaton’s phenomenal use...
Read More