Denis Villeneuve is one of the most talented and exciting directors in contemporary cinema. In Prisoners he portrays vengeful parental anguish with a palpably visceral tension. In Sicario he depicts the bleak US-Mexico drug war with a masterful flair for thrilling restraint. And in his most recent film Arrival, his first foray into science fiction, he explores human contact with extra-terrestrial life with a perceptive intellect and moving emotional insight. With Eric Heisserer’s screenplay, based on Ted Chiang’s short story “Story of Your Life”, Villeneuve has created another brilliantly executed film, featuring a fantastic central performance and stunning cinematography infused with his now distinctive blend of astute observation, intelligence and foreboding.

The film opens with scenes of linguist Louise Banks (Amy Adams) caring for her adolescent daughter, who eventually succumbs to cancer. Later, Louise is interrupted during a university lecture with news of the arrival of twelve extra-terrestrial spaceships that have landed at various locations around the world. Along with Ian Donnelly (Jeremy Renner), a theoretical physicist, Banks is recruited to initiate communication with the visitors and ascertain their intentions at the spaceship in Montana.

As Louise delves deeper into the intricacies of the aliens’ language, she begins to have hallucinations and visions of her daughter. Meanwhile, researchers investigating other spaceships around the world have begun to develop their own interpretations of the visitors’ intentions, not all of which are optimistic. However, Louise is not so convinced about these conclusions, and seeks further communication with the aliens before it is too late. 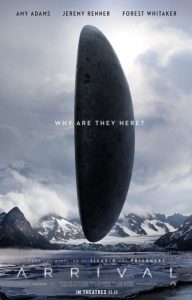 Villeneuve is acquiring a reputation for making tense, taut, often cerebral films, and Arrival is no exception. The film’s explanations of some of the finer aspects of linguistics – the aliens’ alphabet, its structural components – are insightful but not cumbersome. This enables the film’s intriguingly complex ideas about the relationship between language and reality – about how languages shape not only thought processes but also how we perceive the world – to organically emerge and intertwine with the plot’s more action-based elements.

Arrival is also likely Villeneuve’s most visceral, emotionally moving work, and this grounds its more abstract themes. The performances are all strong, but there is no doubt that Adams is the film’s centre and beating heart. Her Louise is intelligent and expressive, intuitive and open. She embodies the importance of language for communication and bridging differences with level-headed compassion, and she once again proves her versatility as an actor.

Two other elements merit particular praise for helping to create the film’s immersive atmosphere. Firstly, Bradford Young’s cinematography is simply breathtaking. Despite the earthy brown and grey tones, there is a grounded tenderness to many of Young’s images that is intimate and yet sweeping. As an example, the scene of fog rolling over the hills as a spaceship stands in the background is hypnotic and serene, with just a hint of foreboding. Secondly, Jóhann Jóhannsson’s tense and curious score perfectly complements the film’s broader themes, and the use of Max Richter’s yearning, pensive ‘On the Nature of Daylight’ during the prologue and epilogue is a stroke of genius.

Arrival succeeds so well because it manages to simultaneously expand and transcend the confines of its genre, and in doing so is destined to become a contemporary classic.

Arrival is available on DVD from 22nd February through Roadshow Films.

Written By
Dan Santos
More from Dan Santos
Birdman or (The Unexpected Virtue of Ignorance) is a visceral, voracious film....
Read More