With Valentine’s Day just around the corner surely there’s no better time to release the next film in the Fifty Shades trilogy. Because nothing says true love like a good old dose of domestic violence.

The second and current film begins with Ana as a single woman, but two seconds later Christian has stalked her to an exhibition where he manipulates her into taking him back. He even convinces her that there will be “no rules” – no longer will he dictate what she eats, force her to isolate herself from her family, stalk her to her apartment and rape her, and make her submit to his every desire. But he will still try to buy her love with extravagant gifts, tell her what to wear, buy the company she works at as a means of controlling her life further, and yell at her to “DO WHAT YOU’RE TOLD FOR ONCE!” Ah, so romantic.

Then there’s sex, relationship talk, sex, “I’m like this because I was abused”, more sex, what happened to Kim Basinger’s face, sex, helicopter accident, sex, Christian reaaaaally wants to change for Ana, sex, and then to finish the film, a suggestion of evil to come by way of ANOTHER man (obvs, because Christian is clearly the perfect gentleman). You will no doubt be shocked to hear that the storyline is really quite lacking. 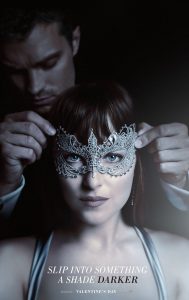 The dialogue, much like the books upon which these films are based, is fairly embarrassing, unintentionally eliciting many laughs. Some of the scenes feel like something out of a bad soapie; James Foley’s direction along with E.L. James’ source material isn’t just lacklustre, it’s often flat out bad. The only redeeming features are the costumes, production design and soundtrack, though it’s disappointing that Taylor Swift would lend her name to this franchise to say the least.

If you’re in the mood for some softcore porn, then maybe there’s something for you here (assuming you’re an adult who realises this is not realistic sex). But at the same time, the message this series sends is deeply disturbing, and would-be viewers should think twice about contributing to the film’s box office sales. The first film reportedly left adolescent girls confused about sex and relationships, contemplating whether male violence could be a sign of affection, or if stalking means “he really loves you”. This is truly terrifying. Although, it seems it’s not just young people confused by this. This reviewer was disheartened that while various women in the audience whooped and cheered when Ana defended herself against a man sexually harassing her in the workplace, they also did the same when Christian got down on one knee, with one audience member screaming “TAKE HIM!” Both of these characters were abusive men. One of them just had a bit more charm, and billions of dollars to go with it.

Ana does walk out on Christian in multiple instances, and does try to assert her own power in the relationship, calling him out on much of his controlling behaviour. But ultimately she remains under his spell, and she always comes back. It seems that E.L. James (and in turn, her husband Niall Leonard who is credited as screenwriter) are trying to say “Yes, look, we are acknowledging that Christian does screwed up things, and Ana won’t tolerate that unless he changes and turns into a magical prince”, but they nevertheless have her return to him time and time again. This is classic behaviour in abusive relationships, where women hold onto the hope that their partner will change, despite all evidence suggesting otherwise.

While I’m inclined to think that the second film is mildly less screwed up than the first due to Christian appearing to change some of his ways (not that he ever considers seeking professional help mind you), the fact of the matter is, this franchise continues to perpetuate deeply damaging myths about relationships, romance, and the ways women should be treated. Domestic violence is not just physical, and those that reject claims that this film glamorises DV should be reminded that this doesn’t refer to the bondage scenes, but the mental and emotional manipulation and Christian’s clear desire to have ownership of Ana. Do we really want to teach young girls that if a man can’t even handle them talking to another man because he considers her his PROPERTY, that that’s something to be flattered, or even turned on, by? It’s time people woke up and said no to supporting this rubbish.

Fifty Shades of Darker is in cinemas from 9th February through Universal Pictures.

Written By
Claire Robson
More from Claire Robson
He’s just not that into you. But who cares because the single...
Read More