Patriots Day is a film that did not need to be made. Shaped around the 2013 Boston Marathon bombing, any citizen of the world is well-versed in the details of the event and its aftermath. It is on director Peter Berg’s shoulders to justify the making of this film, and he does a pretty good job of it.

Patriots Day begins with establishing the city of Boston as a place conducive to happiness and strong relationships. The characters are: Tommy Saunders (Mark Wahlberg) and Police Commissioner Ed Davis (John Goodman), members of the Boston Police Force; Patrick Downes (Christopher O’Shea) and Jessica Kensky (Rachel Brosnahan), a newlywed couple very much in love; Officer Sean Collier (Jake Picking), a young man who finally gathers the confidence to ask out MIT student Li (Lana Condor); Dun Meng (Jimmy O. Yang) who had bought a BMW to impress girls; and Sergeant Jeffrey Pugliese (J.K. Simmons), a man who shows affection for his wife and community spirit at a local Dunkin Donuts. Together they combine to represent the positive and chummy ethic that the people of Boston enjoy. After their introduction, we come to see another side of their characters, one comprised of fortitude.

Amongst this montage of introductions, we are brought into the living-room of the Tsarnaevs. The room is poorly lit and claustrophobic. Tamerlan (Themo Melikidze) and Dzhokhar (Alex Wolff) sit together brooding and planning the bombings in secret. The tone of the scene is disparate from the otherwise jovial sensibility of the other introductions.

In this scene, and perhaps all of the scenes in which the Tsarnaev brothers feature, it feels like Berg is confused about how to characterise them. It seems that the primary source of confusion lies between whether to delve into the psyches of these two obviously troubled figures, or whether to depict them as human representations of evil and horror. There are points in the narrative, after the bombing has taken place, in which Berg gets close to apportioning Dzhokhar some level of psychological complexity (‘the US government did 9/11’), but the glimpses of this are insufficient for any real understanding of him or Tamerlan. This means that the function of these characters is only to disrupt the pleasantness of Boston, and to provide some tension and terror in the film. When the Tsarnaevs meet their inevitable end, the sense of retribution entangled in the scene is undoubtable, even if Berg did not intend this.

In the moments leading up to, and of the bombing itself, Berg’s direction takes on a confidence and ownership that renders the sequence immensely powerful. At first, the finish line of the marathon is encircled by smiling, excited people watching their friends and family complete the race. Berg’s repeated returning to showing the action through a surveillance camera adds a nervous, foreboding quality. The absence of sound induces worry. 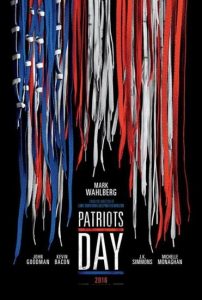 As the bombs are detonated, the editing is quick and jarring, which succeeds in showing the senselessness and horror of the event. The camera is held close to the faces of the shocked and scared characters. Berg does not go about depicting delicately; and nor should he.

In the moment of the bombing, and the happenings thereafter, it is very likely that Berg drifted from the facts of what happened. What allows us to suspect this is the ubiquity of Walhberg’s character, Tommy Saunders. A senior member of the Boston Police Force, Saunders is forced to man the finish line at the marathon as punishment. He appears immediately after Dun Meng escapes from his car that the Tsarnaev brothers stole from him. Saunders is also constantly imposing himself on the Federal investigation of the bombings, led by Special Agent Richard DesLauriers (Kevin Bacon). We know with some certainty that Saunders is not a real person, and that even if he was, he would not have been present at all of these pivotal events.

Saunders is a typical Wahlberg character: obtuse, Bostonian and good-natured underneath. His inclusion into Patriots Day is most likely because of Wahlberg’s ability to draw audiences to the films he is in, and to provide a central reference point for the events portrayed in the film. However, in a film based on true events, Wahlberg’s character feels inserted and artificial; moreover it undermines the collective spirit that the film attempts to generate.

Despite its key interest in documenting the evident negativity of the bombing, Patriots Day, as indicated by its title, prioritises the recognition of the heroics of emergency workers and helpful citizens. Berg is importantly subtle about his veneration for them, exhibiting their heroics within the context of the film.

This also feeds into how the city has begun to rebuild from the mass trauma of the bombing. The brave, commanding response of the Bostonian populace showed the true character of the city. The sprawling city, constantly shown through bird’s eye shots, comes together in a united, loving way to remember but move on from April 15, 2013.

Patriots Day is in cinemas from 2nd February through Roadshow Films.

Written By
Nick Bugeja
More from Nick Bugeja
Toni Erdmann may be the funniest film to hit cinemas in a...
Read More