There seems to be a trend emerging of handsome leading men playing unseemly, balding male characters. Christian Bale did it in American Hustle, and so did Johnny Depp in Black Mass. Matthew McConaughey is the latest actor to do this in Stephen Gaghan’s Gold. At first, this was welcomed onto cinematic screens. It pitted superstar actors in roles unbecoming of their appearances, thereby allowing them to unrecognisably absorb themselves in character. Perhaps Gold has the opposite effect. Rather than subsume himself in the role, it is hard for us as viewers to see anything else other than McConaughey playing a role much too unchallenging for someone of his calibre.

McConaughey plays Kenny Wells, the son of a wealthy mining businessman (Craig T. Nelson). After his father’s death, Wells is motivated to make something of his existence. That leads him to getting into contact with Michael Acosta (Edgar Ramirez) – a man who, without corroboration, gloats about his successes with finding gold in obscure, hidden parts of the world. Caught up in the fantastical desire for gold, Wells ironically sells his long-time girlfriend’s (Bryce Dallas Howard) watch. He sets off for Indonesia to meet Acosta.

Wells and Acosta hastily agree to search for gold in the Indonesian forest, initially without success. The harshness of the outdoor conditions weighs heavily on Wells, and he contracts malaria which almost kills him. His survival takes on greater importance for him, as he awakes from the malaise a millionaire: Acosta and his employees have discovered gold. As a result of being caught in ‘80s America, Wells is then embroiled in deals and disputes with hungry corporations.

The rest of the narrative is not worth remarking upon; not because it would be a travesty to reveal too much of Gold, but because it eventuates in such a muddled and plainly derivative fashion that it would be a waste of your time. On the other hand, revealing it in its entirety now may save you from two hours of huffing and puffing.

A big part of the failure of Gold to captivate is the product of its unwavering dedication to battering us with tropes of the ‘true story’ and of ‘80s period films. They permeate almost every aspect of the film- narrative, dialogue, character, music and cinematography- rendering Gold uninspired and dull. Even though the film is so obviously Oscar bait, there is nothing about Gold that encourages us to latch onto it like a fish to a rod embellished with prawns. 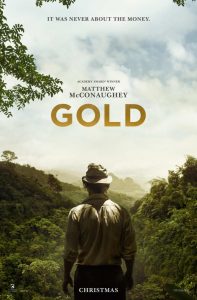 Following with this, Patrick Massett and John Zinman’s screenplay is wayward, anchored only by Hollywoodian truisms (some of these are ‘I want a piece of the pie’ and even worse, ‘the last card you turn over is the only one that matters’). The script overestimates its own appeal, which leaves McConaughey and Gaghan without anything substantial to work with.

However, it must be said that Gaghan’s direction does very little to elevate the material. Instead of providing us with something psychologically insightful or new, Gaghan opts to merely plonk the camera in front of the action (if you can call it that) and hope for the best. His only attempts to enliven the picture are to saturate the mise-en-scene with golden opulence, like in The Wolf of Wall Street. The ‘80s soundtrack, unlike in Scorsese greats such as Mean Streets and Casino, feigns oomph. All it does is to further confirm the film’s total absence of imagination.

What is probably most irritating about Gold is that it seems to believe that it takes us on an entertaining and thoughtful journey. Its apparent arrogance, evident especially in the decadent party scenes, is founded on a misconceived idea of us reflexively being in awe of something that we have seen many times before. It also does not help that the narrative loses all steam about 40 minutes in, leaving the remainder of the runtime with not much to do. It elongates itself by arbitrarily introducing new obstacles and problems for Wells that are awkwardly brought into the action.

McConaughey plays Wells as a man moulded by his social and economic environment. He avowedly subscribes to masculine ideas of ambition, pride and fraternity. His only reality is that of capitalistic gain- everything for Wells boils down to how to find gold and make money. Wealth confers power, and power for men like him is everything (as banally remarked by McConaughey on many occasions). Probably the most valid thing Gold acknowledges is the great overlap between greed and masculine pride.

For most of the film, even in its more intense scenes, McConaughey feels on autopilot. Famed for his adoption of method acting techniques, McConaughey’s performance as Wells never kicks into gear. Ramirez is underwhelming as Wells’s sidekick Acosta to the extent that he barely justifies his place in the film. In a film that could have used chemistry between the two leads, McConaughey and Ramirez deliver performances that are incongruous with one another. Bryce Dallas Howard’s portrayal of Wells’s on and off lover, Kay, is probably the most astute performance in the film, despite being left with little to do.

To some degree, Gold masquerades as an in-depth character study of Kenny Wells and the nature of American life. It urgently wishes to mark his ascendance from the unexceptional to the exceptional, and simultaneously analyse larger structural American themes. It undeniably falters when it fails to clearly condemn Wells’s subscription to greedy egotism. Gold, at times, almost steps to reject Wells’s treatment of Kay and others, but in the closing moments reaffirms him as a sympathetic character. This undercuts much of the preceding events that transpire in the film.

Gold nonsensically concludes as a non-committed celebration of the excesses of capitalism, embracing Wells as a character worthy of our liking. This is of course not its only gaping fault, but it is one of its largest. If you want to see a ‘true story’ worth seeing, Jackie is that film.

Gold is in cinemas from 2nd February through Studiocanal.

Written By
Nick Bugeja
More from Nick Bugeja
Patriots Day is a film that did not need to be made....
Read More