Ben Affleck returns as director/lead actor after his Oscar success with Argo. Live by Night is his new gangster drama set in the prohibition era. Warner Bros are the producers here and have been working with Affleck in recent times. To give you a taste, it’s like watching Boardwalk Empire infused with Zack Snyder’s Batman V Superman: Dawn of Justice. Make up your own mind if this is a good or bad thing, but do expect a DC universe feel. Affleck’s lead character Joe Coughlin is an outlaw: very vigilante, very Batman. And then there’s Affleck’s wooden schtick.

Live by Night has a tight narrative and doesn’t waste time getting into its story. In fairness, at 2 hours and 8 minutes duration it builds well. It is also nice to see Elle Fanning as Loretta Figgis in a small but dark role. There are plenty of voice overs and history lessons. The gangs in question are an Irish mob and the Italian Mafia. Geographically they control the alcohol, gambling and drugs. Joe is the son of a Boston Police Captain, Thomas Coughlin (Brendan Gleeson) and also dabbles in petty crime, making him a complex character. His other major hiccup is having an affair with Irish mob boss Albert White’s (Robert Glenister) girlfriend, Emma Gould (Sienna Miller). Miller is convincing as a rough diamond with her thick Irish accent. It doesn’t take long before the mafia Don, Maso Pescatore (Remo Girone) learns about this affair and uses it for his own gain. 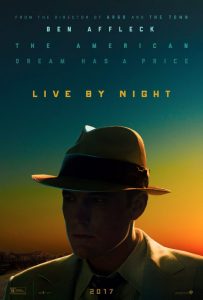 Visually this is a striking film. Having this DC-esque quality gives pulpy and blockbuster luster to the gunfights, car chases and everything in between, and does distinguish it from the sepia realism of Boardwalk Empire. In this regard it is crisp and more accessible to the eye, immersing you right into its action. However, it also feels like this storyline has been done before, with its familiar world with predictable characters and tension building scores. This is only seemingly different through its throwback aesthetics.

Live by Night is made up of masculinity but tries to make its way to sensitivity. This doesn’t seem to work and is awkward, especially in the sex scenes with Joe. In fact they are only with him. They come across as trying to be sensual, but play out more like a grimacing Affleck nodding to his fellow fans, or cementing the notion that in your typical superhero narrative the boy-always-ends-up-with-girl. When you compare Joe as a character to the likes of iconic gangster Tony Montana (Al Pacino) in Scarface, he doesn’t scream ‘charisma’, nor does he come across as someone who could get all the women. Joe is very stolid, although it may suit the narrative going between gangster and good guy. At times it is hard to hold back the laughter.

To some Live by Night may work. Yet timing is another factor. Considering the legacy of Boardwalk Empire, all that needs to be said on the prohibition and the genre itself has been raised and has set a benchmark. Some critics have given praise to Affleck’s portrayal and his direction. However it is hard to look at such a flat delivery with poise. One would assume in order to portray such a character you need energy in the first place.

Live By Night is in cinemas from 26th January through Roadshow Films.