If you aren’t up to date with the xXx program, and you’re not keen to venture a Google search of those three letters, it is a group assembled under the tutelage of a man called Gibbons (Samuel L. Jackson). They’re skateboarders, martial artists, footballers, lunatics and whatever else. The kind of people who do the jobs that soldiers and police aren’t cut out for – extraordinary missions that require a token extreme sport, a kamikaze attitude, a hard partying lifestyle and a magnetic ability to pull chicks. Xander Cage (Vin Diesel) is a bit of a legend among them. For some reason, women throw themselves at this 50-year-old gym junkie in a sheepskin jacket whose arrogant wisecracks are never quite as smart as he’d like them to be. 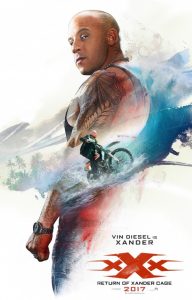 When Gibbons is attacked, a self-exiled Xander Cage is resurrected by the steely but exasperated Jane Marke (Toni Collette) to find the weapon called Pandora’s Box. This is capable of hacking and weaponising orbiting satellites and has been stolen by some mysterious people with scarily xXx-level skills.

For all its cookie-cutter characters, bombastic soundtrack, the mix of patriotic civil duty and sheer douchebaggery, the neverending shootouts, the bloody motorbike surfing, there are in fact some redeeming elements in this bewildering testosterone-fuelled comedy. And it is a comedy. It can’t not be with Vin Diesel doing some of his finest work since Groot in Guardians of the Galaxy.  The admirable commitment to ironing out any trace of common sense or logical plot development is also a winner. Taking potential global catastrophe seriously is overrated, and screenwriter F. Scott Frazier and director D. J. Caruso have made sure to keep things light and cheerful with a screenplay full of quips that would make McBane proud (sad Simpsons reference), and a loose grasp on the hazards of firing machine guns into crowded markets.

It’s a shoot ‘em up for all the people who agree with Samuel L Jackson that dramas like Manchester By the Sea are just a bit too Oscar-y to really be worth the admission. This largely explains why the formula hasn’t changed since the original. The guys are smugly invincible and, for the most part, the female presence is largely aesthetic – though Aussie Ruby Rose and Bollywood star Deepika Padukone at least have parts here where they can ‘kick ass and look dope while they’re doing it’. If that’s your thing, this will be frequently enjoyable. You might just as easily despair. Or both. Either way, please – let’s not make this quality of blockbuster a trend.