Many will be familiar with Saroo Brierley’s story, having previously been covered some years back by 60 Minutes. Now it gets the big screen treatment in Lion. Five-year-old Saroo (Sunny Pawar) gets lost in Calcutta, India, 1600km from home, unable to find his way back to his brother Guddu (Abhishek Bharate) and mother Kamla (Priyanka Bose). Living on the streets for three weeks before being transferred to an orphanage, Saroo is then adopted by Australian couple Sue (Nicole Kidman) and John Brierley (David Wenham) and goes to live with them in Hobart. As an adult, Saroo (now played by Dev Patel) becomes fixated on finding his birth mother to let her know he is safe, turning to Google Earth for help.

Based on Saroo’s book, A Long Way Home, Lion is adapted for the screen by Luke Davies. Davies is probably best known for the hard-hitting Aussie drama Candy, being both the author of the novel and screenwriter for the film. Like Candy, Lion has emotional heft, but rest assured that it is significantly more uplifting. In the director’s chair is Garth Davis, whose resumé consists mostly of commercials and who delivers his first feature length film. The end product is well-executed, however it loses steam in the second act.

The first act follows Saroo from his life at home in India up until his arrival and first year spent in Hobart. Sunny Pawar is an absolute treasure, pulling at the heartstrings and creating a mesmerising viewing experience. It’s when the action shifts to his adult years that this begins to wane. When his fixation on finding his parents leads to the breakdown of his relationships with his adoptive parents and girlfriend, Lion becomes more gruelling and loses some of its emotional core. However, the finale we’re all waiting for restores the balance and tears will most definitely be shed. 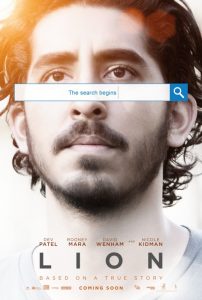 The quality of the acting is strong throughout the entire film. Dev Patel delivers one of the most convincing Australian accents to date, proving it actually is possible to do so – please let Jude Law and Quentin Tarantino know. Nicole Kidman gives one of her best performances in some time, even managing to emote through the Botox for a change. It’s also a relief that despite director Garth Davis’s background in commercials, this doesn’t feel like another Nicole Kidman Chanel no. 5 advertisement. Perhaps the weak link is Rooney Mara, although the problem may be in how her character, Lucy, is written. As Saroo’s girlfriend she doesn’t seem to do a hell of a lot, other than remind us that he’s a shitty boyfriend with little time for her.

It’s also puzzling that the film would portray the Brierleys’ other adoptive son, Mantosh (Keshav Jadhav & Divian Ladwa) so negatively when based on a real person with mental health issues. Reportedly the real Mantosh was very disappointed with his portrayal. On the other hand, wanting to stick to Saroo’s story as closely as possible, it’s satisfying to hear that the producers of the film rejected all offers from production companies that wanted to change the Australian setting to America. Let’s all groan in unison at the thought.

This reviewer did have a couple of minor gripes with this film. Saroo spends ages trawling Google Earth (which on film is quite tiresome, however it’s also realistic), but then his eventual breakthrough seems to come out of left field and is difficult to believe. The most jarring moment of all is when Sia’s ‘Never Give Up’ accompanies the final credits. It feels horribly out of place after the beautiful score by Volker Bertelmann and Dustin O’Hallaran, and cheapens what was up until that moment a beautiful story.

Overall, despite the middle Australian section failing to match the others in terms of engagement, Lion showcases a truly remarkable story. Offering hope amidst profound sadness and loss, it should resonate strongly with audiences.

Lion is in cinemas from 19th January through Transmission Films.