It can be so heartening to see the quality of films on offer for the younger audience. On the animation front they’re spoilt for choice, with Disney, Pixar, Dreamworks Animation and Illumination Entertainment all providing top quality choices. And recently we were treated to one of the great teen films of this generation with The Edge of Seventeen. But for every gem, there are usually multiple piles of steaming crap. Unfortunately, Middle School: The Worst Years of My Life falls into the latter category.

Rafe (Griffin Gluck) has been kicked out of various schools before landing at Hills Village Middle School midway through the semester. He quickly discovers that head honcho Principal Dwight (Andy Daly) is a stickler for the rules and his new number one enemy. On the home front, he lives with his mother Jules (Lauren Graham) and sister Georgia (Alexa Nisenson) and also has to contend with mum’s A-grade arsehole of a boyfriend, Bear (Rob Riggle). When Principal Dwight destroys Rafe’s sketch book, he and his best friend Leo (Thomas Barbusca) hatch a plan to break every rule in the book one by one. 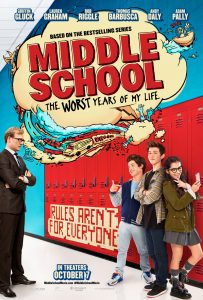 I didn’t realise they still made films like this. I thought we’d progressed. To Pixar! To depth! To leaving out the dumb jokes about hot step-moms and being fat. But no, we’ve got one-dimensional villains, Vanessa Hudgens 2.0 (Isabela Moner) playing the love interest, and plot holes galore. Somehow Rafe gets into the school every single night (are the doors not locked?) and the principal never once thinks to set up any form of surveillance when every morning he finds the school in some new form of disarray. Middle School paints the world as black and white, and why is it necessary to mislead kids about this being the way the world works? If Disney can create multi-faceted animated characters, why can’t a film with living breathing actors? The evil step-parent-to-be is a standard trope of children’s films of yesteryear, but now it’s just getting old. Bear has literally no redeeming features – the relationship between him and Jules is too unbelievable even for kids.

Perhaps the answer is found in the filmmakers. Director Steve Carr is most well-known for early noughties Eddie Murphy films, Dr. Dolittle 2 and Daddy Day Care, with recent additions to his resume being a segment of Movie 43 (the one with a scatological sex act), and a short film titled Touch a Tit, Save a Tit. Obviously a quality filmmaker right there. The three screenwriters, Chris Bowman, Hubbel Palmer and Kara Holden, share just three feature films between them, none of which you are likely to have heard of. Perhaps the books (by James Patterson and Chris Tabbetts) worked as a light-hearted silly joke, but the film does not.

In its defence there are a few mildly redeeming features. Firstly, the animations which represent Rafe’s sketches come to life are decent, and offer somewhat of a reprieve from the bland live action. A point about the problematic nature of standardised testing was appreciated, though not really explored any further. Alexa Nisenson as Rafe’s younger sister was enjoyable to watch even with the sub-par dialogue she was given. I laughed at about two or three jokes delivered by Rob Riggle. And lastly, there was an unexpected emotional twist about two thirds of the way through the film, which made Rafe the teensiest bit easier to care about. However, this came too late to make a big impact.

Will kids like it? It’s hard to say. If they’ve grown up on Pixar and better quality films, then no. Their standards will most definitely be too high. If they’ve only ever watched crap, then maybe. But they deserve better. With all the choices out there, why settle for mediocrity?

Middle School: The Worst Years of My Life is in cinemas from 12th January through Roadshow Films.