You shouldn’t normally judge a film by its title, but in the case of David Frankel’s Collateral Beauty it wouldn’t actually be a bad place to start. Indeed, the clumsy title should be the first warning sign to filmgoers that this isn’t the most attractive festive season option.

The film begins with Howard (Will Smith), the founder of an advertising company, inspiring his loyal flock of sheep with a rousing speech. With the camera spinning around him like a merry-go-round, Howard lectures us on the three factors that motivate all our decisions: Love, Time, and Death. At this point, the audience is primed for a feel-good Will Smith picture, the kind of film where beautiful women swoon in his presence. But the dizziness from this opening shot means we wake up three years into the future to find Howard mourning the death of his daughter and a shadow of his former self. From then on, we’re left to stare at Smith’s pouty serious face – the same one we saw in such hits as The Pursuit of Happiness and Seven Pounds.

Howard’s mental state has great implications on his business and his conflicted colleagues. In order to both frame and help him, three of his closest friends (Edward Norton’s Whit, Kate Winslet’s Claire, and Michael Pena’s Simon) do what all good friends would do; they hire actors to read Howard’s private letters, pretend to be physical incarnations of Love, Time, and Death, and stalk him around New York. It’s a better premise than it sounds, especially when it becomes apparent that Howard isn’t the only one in need of wisdom. 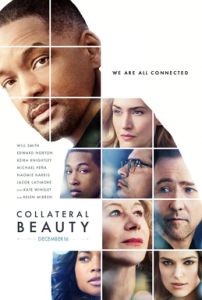 The comical storyline fits a little awkwardly within the film’s dramatic tone, but this is far from the film’s biggest issue. What is disappointing is that the script is heavy with clichés and exposition, the soundtrack emotionally manipulative, and the lighting more suited to a rom-com. The key to Frankel’s direction is that if you say a line slow enough and with enough eye contact, it will sound like the most profound words ever spoken. The trick might work on the audience once or twice, but it’s a cheap tactic when dealing with issues of mourning and recovery. This is a film that wants to deliver depth, but is unable to offer much more than shallow platitudes.

For a film that also attempts to say so much about time, there is too little time for each of Whit, Claire, and Simon’s subplots to play out in full. Winslet’s Claire and her baby issues, for instance, are fleshed out with so little detail that she may as well not be in the movie. Without meaning to disrespect a great actress, hardly anything would change if you digitally removed Winslet from the film (incidentally a technical approach her colleagues can do with great competency when trying to frame Howard). Likewise, we learn so little about Whit’s backstory that his efforts to reunite with his daughter aren’t worthy of our emotional investment. Norton instead comes across as a creep, and it’s uncomfortable to watch him flirt so aggressively with Keira Knightley’s Amy, who is the reluctant embodiment of Love.

These players and their mini crises are ultimately distractions from Smith’s redemption tale. Smith has always been more convincing in his more light-hearted roles, but fortunately he’s a good enough actor for audiences to feel at least somewhat invested in his path to discover peace.

Just as its title tries to say too much, so too does the film try to tell too many stories and provoke a few too many tears. Left to waddle somewhere between a sombre drama and a light Christmas flick, Collateral Beauty is too inconsistent to have its intended impact. Inevitably, some filmgoers will leave the cinema in tears and may even find themselves satisfied by the mild twists in the film’s closing scenes. For everybody else, Collateral Beauty should be as forgettable as its name and any of Kate Winslet’s lines.

Collateral Beauty is in cinemas from 12th January through Roadshow Films.