Ballerina has a lot going for it all at the same time. The first thing that you’ll notice about this special film is the degree of visual detail that has been invested into every frame. Through the presentation of frame after frame, scene after scene, the consistent richness of the animation leaves us under no illusion as to the copious efforts of filmmaking duo Eric Summer and Éric Warin. The animation is as alive as any of the characters in Ballerina, adding another vital layer of energy to the action of the film.

The high angle wide shot of two orphan friends, Félicie (Elle Fanning) and Victor (Dane DeHaan) entering Paris for the first time is marked by an irresistible sense of wonder. We are introduced to the beauty of 19th century Paris through the eyes of these two underprivileged orphans. The immersive visual style adopted by Ballerina is the animated counterpart to Scorsese’s Hugo.

The narrative of Ballerina is a recognisable one. Félicie is an orphan, unhappy with her lot in the oppressive orphanage. Her best friend is Victor, a fellow orphan. Early on, Félicie and Victor flee the orphanage with haste, both wishing to fulfil their dreams in Paris. Félicie wants to become a ballerina, and Victor an engineer. Félicie’s dream emanates from the fact that a music box is the only remnant of her biological family.

Almost immediately, Félicie forms a bond with a cleaner, Odette (Carly Rae Jepsen) who Félicie stumbles upon while watching a performance of Swan Lake. Odette was a once-in-a-lifetime dancer who has been consigned to cleaning since a leg injury ended her career. Odette is integral in helping add finesse to Félicie’s energetic, passionate style. This is of great personal importance to Félicie, who has found a way into auditioning for a part at the prestigious Paris Opera. Deceptively, Félicie assumes the identity of rich-kid Camille (Maddie Ziegler) in order to gain the position in the class. The directors sufficiently contrast Félicie’s good qualities with Camille’s sense of entitlement to make us have no qualms about Félicie’s methods. 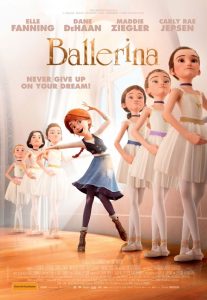 The themes inherent within Ballerina – supportive friends and family, consideration for others, dedication to what makes you happy, and the paramountcy of having ambitions – are appropriately pedagogical for children. The film takes us on Félicie’s journey, and thus the lessons she learns we learn. In this respect, Ballerina is a film that exudes positivity. Meshed with this is an adaptably fast-paced narrative that ensures that our attention never wanes. Ballerina is also rewarding for an adult audience, reminding us of the joys of childhood, and it always engages with the subject matter honestly and truthfully.

For a film that admittedly adheres to many worn tropes and archetypes, there is a surprising lack of ham-fisted moments. Even though we recognise the familiarity of the narrative and some of the characterisations (such as Camille’s bratty petulance), Ballerina feels original and fresh. Probably, this is due to the copious amounts of vitality invested into the visual and tonal makeup of every scene. This guarantees that the triteness of some of the tropes are firmly buried underneath the substance of the film.

In search of retaining audience attention, Ballerina can sometimes institute jarring tonal shifts. This can be disorientating, especially when comedic, amusing scenes are followed by sombre, dramatic ones. Klaus Badelt’s score, however, helps to alleviate the blemishes of this, by directing our feelings to cohere with the overall sensibility of individual scenes.

The voice acting in the film is stellar; and the intangible chemistry between Fanning and DeHaan is compelling. They bounce off each other with fervour, making Félicie and Victor memorable and fun characters within the context of the children’s film.

Optimistic, hopeful and praiseworthy, Ballerina shows and reminds children and adults in equal measure of the fact that dreams can be achieved, and obstacles surmounted. Thankfully, Ballerina’s bursting sense of fun is completely antithetical to Fanning’s other film of 2016, the grimly pretentious The Neon Demon.

Ballerina is in cinemas from 12th January through Studiocanal.

Written By
Nick Bugeja
More from Nick Bugeja
Ballerina has a lot going for it all at the same time....
Read More