Even if you know nothing about classical music, it’s likely you’ve heard of Yo-Yo Ma. With more than ninety albums, seventeen Grammys, a Simpsons appearance and a Seinfeld profanity to his name, Yo-Yo Ma is about as famous as cellists can get. It seems only natural then that he gets his own film.

The Music of Strangers: Yo-Yo Ma and the Silk Road Ensemble is a respectful tribute to Ma and his band of uber-talented musician friends from across the globe. One by one, the diverse instrumentalists of Ma’s Silk Road Ensemble are given the chance to tell their story and explain what music means to them. Incidentally, the character portrait of Ma is the least interesting of the lot.

While there’s no denying that Ma and co. are worthy of cinematic recognition, that doesn’t necessarily make The Music of Strangers essential viewing. As lovely as this documentary sounds, it’s a slightly inconsistent journey that is holistically weaker than the sum of its parts. Every performer profiled has a good story to tell, but these don’t quite fit into a great overarching narrative unless the point of the film is simply to gawp at the impressiveness of Ma’s project. 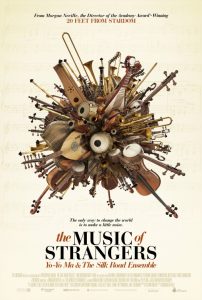 While background knowledge of Ma’s success isn’t necessary, it helps to know a bit about the Silk Road Ensemble before arriving at the cinema. Rather than the film providing all the context about Ma’s ambitious band at the beginning, we’re fed bits and pieces in between the profile segments. It seems odd to learn detailed accounts about the band members before understanding why they’re there in the first place, but this is a problem with editing more than the content itself.

There are threads that tie these stories together, not least the narrative of how people interact with music amid national and global conflict. Chinese artist Wu Man explains how learning the pipa was her way of countering the impact of China’s Cultural Revolution. For Kayhan Kalhor, however, his freedom to play the kamancheh in Iran was curbed by an oppressive government. These narratives, contrasted with the union of the Silk Road Ensemble, express how music is simultaneously an art form of peace, yet is loaded with a divisive power.

The music is what carries this film; anybody with an appreciation of world music and talented performers is rewarded by the brilliant ensemble arrangements that both bookend and bookmark the film. Of particular note is the 360-degree visual and auditory experience director Morgan Neville gives us in the opening scene; he makes us feel as though we’re one of the band members performing live with the troupe. These scenes not only help justify the film’s 96-minute duration, but reinforce all the philosophical notions the film makes about music and its value. While the interview scenes tell us why music is important, these scenes ultimately give us the most compelling evidence.

The Music of Strangers: Yo-Yo Ma and The Silk Road Ensemble screens exclusively at Cinema Nova from 5th January through Madman Films.