There can’t be many people more revered in the history of rock and roll than Iggy Pop and his band The Stooges. A living legend in the history of the genre, he has been on the scene for almost sixty years and his stage antics are as legendary as his bare torso. To put it into context, it’s said that he invented the stage dive one night when he drunkenly dived into a woman’s arms. The Stooges’ concerts are legendary in the industry for being some of the most dangerous and snarling stage performances in music history. At the time they were considered crass and in the poorest of taste; nowadays The Stooges are renowned as one of the most influential bands in history.

Who better then to make a documentary about Iggy and the Stooges than Jim Jarmusch? This white haired maestro of independent cinema is a long-time fan and most importantly knows exactly how to make a great film; see anything in Jarmusch’s filmography and you’ll see why he’s such a beloved filmmaker. He knows exactly how to capture the eccentricity of his subjects and he gets unprecedented access to the strange mind of Iggy Pop. 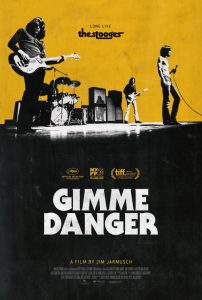 At the age of 69 Iggy is now a relic of a bygone age; all that seems to be left of him is wrinkled skin and memories. His speech is slurred, and to put it bluntly, both he and other members of the Stooges look well and truly drug-fucked. The rock and roll lifestyle takes its toll but Iggy is still engaging and charming as hell. For example, at one point he nonchalantly tells the story of when he was writing his songs and “I smoked a big joint one day out by the river and realized I wasn’t black.” The whole doco is littered with amazing lines like that. Jarmusch in turn is a great interviewer. It’s easy to get the sense that he and Iggy get along which can be the thing that makes or breaks special interest documentaries. Thankfully both of them know what the audience wants to hear about: all the crazy stories and very Dionysian concerts.

The rise and fall of the Stooges took place during one of the more interesting parts of the 20th century. This was during the wild times when free love was mixed with the drug revolution in a cocktail called ‘1970s America’. Gimme Danger is fascinating for the way that it captures this bizarre period. Culture and politics were in a very strange place, as the 1960s ended and no one could quite figure out where to go from here, as Vietnam drew to a close and a nation was absorbing a new kind of music.  This is where and when the punk movement was birthed for which Iggy Pop was the movement’s patron saint.

It’s very clear that Jarmusch is a massive fan of his subjects and for the many casual and/or rabid fans of Iggy Pop and the Stooges this will be a dream come true. For those of us who unfortunately have yet to be exposed to this strange and intoxicating world, Gimme Danger, when viewed purely as a documentary, has a big problem with pacing. Certain sections sag and there’s very little cohesive narrative. Jarmusch does a lot of cutting between different time periods and characters but doesn’t really show all the things you’d expect or hope for. There’s no large charting of the band’s rise into the mainstream, and what was going on in their personal lives as all this was happening seems like a strange omission. Apart from a few text screens that go against the mantra of ‘show-don’t-tell’ most of the doco is just crazy stories occasionally cut with animation.

But we’re talking about a documentary about Iggy Pop and the Stooges – the fact that it jumps around a lot and doesn’t fit into a traditional documentary structure is quite appropriate when you think about it. If you’re a fan of this era, this music or this band: this is the film you’ve been waiting for.

Gimme Danger is in cinemas 26th December through Transmission Films.

Written By
Simon Storey
More from Simon Storey
Is there nothing that Natalie Portman can’t do? Oscar winning actress, mother,...
Read More