After finding success with the cold-blooded Snowtown and blood-stained Macbeth, Australian director Justin Kurzel has found himself on a very fertile career path. But having had his time over again, one wonders if he would opt for an alternate project to Assassin’s Creed to keep the dream alive. After all, when was the last time you saw a worthwhile video game adaptation? It’s a big risk.

This is the story of Cal Lynch (Michael Fassbender), whose troubled life appears to have come to an end when he is strapped in for lethal injection. However, instead of waking up dead, he wakes up in a lab run by a woman called Sofia (Marion Cotillard). This is hardly a reprieve when Cal finds out about all the weird shit Sofia has in store for him, which he can’t really refuse given he doesn’t officially exist anymore in the outside world.

It turns out that for this experiment, they need two to tango: Cal has a strong ancestral link to Aguilar de Nerha, a 15th century member of the Assassin’s Creed, and his mysterious rescuers have a machine that unlocks genetic memory and allows the descendent to live the experiences of his ancestors. Why must Cal be plunged into a century-old war between the Creed and the Templar Order? Because Aguilar was the last person to know the whereabouts of the Apple of Eden, and Sofia and her father need someone with a strong enough genetic link to find out where he put the bloody thing. 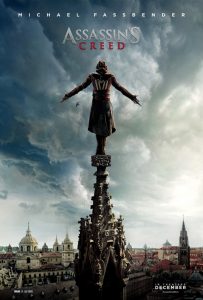 People who’ve played Assassin’s Creed assure me that the story is one of the game’s strongest assets, but this movie will do little to convince the doubters. The game, played over weeks or months — and not crammed and dryly explained within two hours — may well have a tangled web of conspiracies to draw on, but none of these appear to be of much interest to anyone here. It’s a film with a lot of plot to get through, but only as much as is necessary to get to the next bit of action.

The faux science of this bears a strong resemblance to that of Source Code and the half-arsed theology is not too far from the ramblings of Dan Brown, but I only wish this had some of the sense of humour that infused those films. If not for the purposes of ‘laughing with’ then at least ‘laughing at’. The effect of the screenplay by Michael Lesslie, Adam Cooper and Bill Collage is more one of bemusement, because it is a film that promises such meaty rewards on face value – the cast is first-rate, the production design is superb and the action sequences are hard to fault – but offers such a hollow reality. Cal’s exasperated query of “What the fuck is going on?” offers a rare light moment. That it is also reflective of the audience’s experience is regrettable.

On the plus side and perhaps to the pleasure of some of the game’s many fans, while this film has skimped on character and plot, it has unsurprisingly poured much of the budget into action and production design. With the aid of some nifty POV action shots, there’s no doubt that the original medium’s gameplay has informed Kurzel’s direction for the better, and it’s encouraging for gaming fans that the studio has put a decent effort into making this video game transition work. But Kurzel won’t be the one to change the tide.

Assassin’s Creed is in cinemas from 1st January through 20th Century Fox.