Rounding out a fantastic year in children’s animation, Sing cashes in on the talent show theme, delivering yet another win for Illumination Entertainment (Despicable Me, The Secret Life of Pets). Dreams are realised, careers are made, and the question remains: why is Matthew McConaughey playing a koala?

Buster Moon (McConaughey) has one last shot to produce a hit show. When the advertisement goes out for auditions for his talent show competition, a typo results in a larger than expected crowd turning up at his door. Delighted with the turnout, Buster selects his finalists. There’s the smarmy jazz singing-mouse, Mike (Seth MacFarlane), the rocker porcupine who doesn’t want to sell out, Ash (Scarlett Johansson), shy housewife and mother pig, Rosita (Reese Witherspoon), and her not-so-shy singing partner Gunther (Nick Kroll). Rounding out the pack are two teenagers who just want to sing, gorilla Johnny (Taron Edgerton) and elephant Meena (Tori Kelly), but are held back from letting their talent shine for different reasons.

An impressive voice cast – not all of whom are especially known for their singing prowess – are assembled here. Taron Edgerton is a surprise pleasure as Johnny, a British gorilla trying to escape his family’s life of crime. The guy can certainly hold a tune. Tori Kelly is clearly there to sing, but she convinces as the timid Meena even when she isn’t. Seth MacFarlane is probably the most at home, with his previous voice work and clear love of musical numbers definitely working in his favour. Matthew McConaughey as Buster, however, is the most perplexing – for while he’s fine, sure, since when do koalas have Southern American drawls? Then again… koalas don’t exactly have Australian accents either. I’ll allow it. 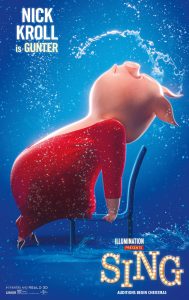 Sing reportedly boasts 85 songs in total (all covers), dating from the 1940s to the present day. A mish-mash of these results in a hilarious audition sequence (it’s best to avoid the trailer if you can as it gives most of this away). Those that are selected practice their songs, but of course few of them actually end up singing the same ones at the finale because, duh, aren’t you aware of how reality TV/kids’ films work?

At 108 minutes Sing is a bit of a slog, especially for kids. It takes time getting there, but pays off at the finale with multiple showstoppers. It’s almost too much, after such a lengthy trip that isn’t always engrossing, to have everything thrown at you all at once with one full-length entertaining number after another. But it’s so joyous it almost makes you forget that up until that point you weren’t too sold on the film. Tori Kelly belting out Stevie Wonder’s ‘Don’t You Worry Bout a Thing’ is enough reason alone to see the film. It is pure joy.

As a whole, Sing doesn’t reach the standard of Illumination’s recent The Secret Life of Pets. But the last half hour is up there as one of the most enjoyable extended sequences of the year. Ultimately it’s worth 108 minutes of your time.

Sing is in cinemas from 26th December through Universal Pictures.

Written By
Claire Robson
More from Claire Robson
Based on the novel of the same name by R.J. Palacio, Wonder...
Read More