In his latest film Little Men, director Ira Sachs further demonstrates his ability to craft deeply humanistic portraits imbued with generous compassion. Focusing on a thirteen-year-old teenage boy as his family moves home, the film follows his experiences making new friends and being caught up in his parents’ financial troubles. More broadly, and like in his earlier film Love is Strange, Sachs captures the humanity in the struggles of everyday people, and patiently observes the ways in which people relate and connect to each other. His unfussy direction, generous screenplay written with Mauricio Zacharias, skilfully modulated performances, and beautifully nostalgic musical score by Dickon Hinchliffe all come together wonderfully to serve this end. Little Men is pensive and thoughtful, nostalgic and hopeful, and overall a subtly moving ode to change.

The film opens with Brian Jardine (Greg Kinnear), an actor, learning of his father’s death. He and his family, his wife Kathy (Jennifer Ehle) and their son Jake (Theo Taplitz), subsequently move into a Brooklyn apartment they have inherited. Below their apartment is a dress shop run by Leonor Calvelli (Paulina García), who has a teenage son named Tony (Michael Barbieri). Despite having vastly different personalities – Jake is more reserved and inwardly creative with his sketches, and Tony is extroverted and sociable with aspirations to be an actor – they complement each other and become fast friends. Together they make plans to attend the same creative arts high school together. 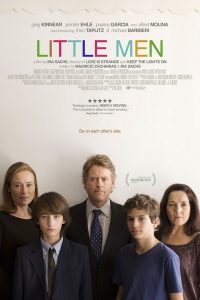 Meanwhile, Brian and Kathy soon learn that their father has been leasing the downstairs space to Leonor at drastically lower prices despite the gentrification and increasing market values of the surrounding neighbourhood. Struggling with finances, due in some part to Brian’s stagnant acting career, they need to increase Leonor’s rent. However, even though these increased rates are still below the market value, Leonor is still unable to pay, and attempts to push back and stand her ground. These tensions consequently strain the two teenagers’ friendship.

Under Sachs’ measured and assured direction, all of the film’s moving parts are tonally synchronised. His style is marked by restraint, underpinned by the tacit, intuitive understanding that less is more, that organic rhythms work best for capturing his subject matter. The empathetic screenplay offers characters who are flawed, burdened and strained, but never spiteful. They are brought to life by a suite of fantastic performances. Taplitz and Barbieri are both unaffected, with an easy natural rapport. And the parents are all terrific, but Garcia is the standout, imbuing her performance with a steely strength and, later, a quietly devastating vulnerability.

Sachs is not interested in making melodramatic statements about life’s struggles. His drama is grounded, focused on moments of connection and conflict. But he is also interested in moments of stillness. This is particularly well-captured in the score playing in scenes of Jake and Tony spending time together – cycling around New York, playing in the park. With subtly aching, wistful violins playing in the background of a dreamy melody, the score is a nostalgic and uplifting approach to capturing the passage of time.

With Little Men, Sachs continues to explore humanistic truths through non-judgemental portrayals of people in the midst of flux, with both minimal flair and consummate skill. For some, the film may be too small and restrained, but arguably this only renders its portrayal that much more affecting and authentic.

Little Men is in cinemas from 8th December through Rialto Distribution.

Written By
Dan Santos
More from Dan Santos
Before seeing Fast & Furious 6, directed by Justin Lin with a...
Read More