Buoyed by the increasing cult status of such classic Christmas fair as Elf, Die Hard and Love, Actually (many screenings of such films in my former home of London are accompanied by mince pies and mulled wine), it’s been tough going for the ‘Christmas Film’ of late. Such memorable titles such as Grumpy Cat’s Worst Christmas Ever and Christmas Eve have graced our screens in the last few years causing many to elicit a groan when thinking of holiday movies as the loathsome genre they are, particularly from us Southern hemisphere dwellers who understand not the desperate search for a last minute turkey (it’s way too hot for that shit) or the constant battle with snow. So it’s somewhat gratifying to see SNL alum and some of comedy’s finest up for a Christmas/adult version of the classic 90s teen ‘party’ film.

Office Christmas Party has a loose plot involving Clay Vanstone, a T. J. Miller type played by T. J. Miller, and freshly divorced, lovelorn Josh, a Jason Bateman type played by Jason Bateman, throwing an epic Christmas party for their staff in order to woo a major potential client and save the branch from being shut down by his ruthless, joyless sister Carol (portrayed by a very stern, slow-burn Jennifer Aniston, who really grows into the ridiculousness of the role). A motley crew of office characters of varying degrees of importance (ie. lines and/or names) pad out the diverse ensemble cast with a plethora of subtle and not so subtle slapstick/fart humour. 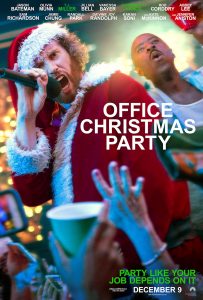 The loose plot of the film allows key players to adlib much of the film, which actually made it, at times, genuinely funny. Kate McKinnon was on form as usual as the buttoned-down HR party-pooper Mary who, predictably, cuts loose by the end of the film and becomes somewhat of a loose cannon. Rob Corddry slotted into his usual role as a grumpy customer service rep who hates everybody, and Aussie Abbey Lee made an appearance as lady for hire/drug dealer with a bag full of cocaine in a sweet turn around from her recent cannibalistic turn in Neon Demon.

The general message of the film (Christmas films have to have a message, don’t they?) is to take risks and not be too safe all the time, or something. Basically, it’s okay to party, even when you’re old and have responsibilities like debt and children. And don’t let your weird sexual fetishes out on the first date. All in all Office Christmas Party is a fun addition to the Christmas film canon which will probably make a resurgence in several years at a holiday pop-up cinema where all tickets include a glass of egg-nog and a doughnut.

Office Christmas Party is in cinemas from 8th December through Entertainment One.

Written By
Kendal Coombs
More from Kendal Coombs
It has been more than 10 years since Nick Frost, Simon Pegg...
Read More