Mahana, the latest film by director Lee Tamahori (Die Another Day), opens with a husband and wife together on the front porch of their house in rural New Zealand. Ramona (Nancy Brunning) sits still in a rocking chair, draped in black. Meanwhile, Tamihana (Temuera Morrison) stands imperiously on the edge of the porch, looking over the acres of countryside he owns. The shot is about as laconic as they come, but it immediately provides us with great intuition about the characters and the narrative that is about to unfold.

Tamihana is a self-made man who has built a successful farm. He often abrasively reminds his family of the rewards that hard work has reaped for them. In one scene, he forces his grandson, Simeon (Akuhata Keefe), to skin a sheep. We soon realise that the Mahana farm has a surplus of sheep, and that Tamihana only made the order to teach Simeon a lesson.

Very early on we learn that a rivalry exists between the Mahanas and a fellow farm-owning family, the Poatas. In a surprisingly lively scene, the Mahanas, in one car, and the Poatas in another, race to a funeral. Without hesitation, we suspect that Tamihana’s unforgiving obstinacy is a leading cause of the rift between the families. Only to the end of the film is the dark truth of a mutilated past revealed.

Despite the seriousness of the subject matter, Tamahori never loses sight of the power that humour has in energising a film. Many of the key scenes in Mahana are punctuated by offhanded jokes that shed light upon the overall lovingness of the large Mahana family. 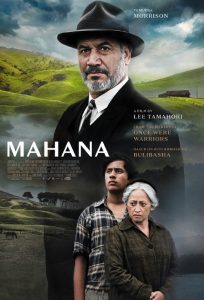 John Collee‘s screenplay does not tell a story that is specific to Maori people or culture: indeed, the film could have portrayed any family or any culture at any point in time. However, the success of Mahana lies in the way that Tamahori makes the details inherent in the film essential. His choice to embellish the film with symbols of Maori culture (native music, dances) is vindicated, as Tamahori provides a resonant portrayal of the richness of Maori custom.

Undoubtedly, the film’s engine is the conflict between traditional values of discipline, hard work, religiosity, and more youthful ideas of the acceptance of others, transparency and cordiality. Tamihana represents the former; Simeon the latter. Tamihori canvasses this both on an intangible, ideological battlefield, and also on a physical one. As the audience, we are positioned to align with Simeon’s freer conceptions of family life. But in the physical world of the film, Tamihana expels Simeon and his family from the homestead after perceived insubordination from Simeon. Tamihana punches his grandson for breaching dinner table decorum, and the event is marked with relational irreparability.

Temuera Morrison’s turn as Tamihana is consistently engrossing; his presence in the frame irrepressible. Morrison’s performance is controlled yet powerful, ensuring that Tamihana never loses his hardened humanity. It would have been easy for a character like Tamihana to become banally evil, and only Morrison’s performance saves him from that fate. Newcomer Akuhata Keefe is exuberantly watchable as Simeon Mahana. Keefe captures Simeon’s necessary youthful energy and conviction in every moment on-screen. Similarly, Nancy Brunning is reliable as Ramona, thriving especially in the final scenes. The large ensemble cast does a nice job of backing up these three performers to make Mahana a meritorious film about the pitfalls of family life.

The film’s weakest moments are definitely when it occasionally veers onto the path of melodrama. Staged, climatic instances of conflict are contrary to Mahana’s allure, and it fares much better when depicting smaller, truthful human encounters.

Ultimately, Mahana represents a stellar return to his filmmaking roots for director Lee Tamahori. Mostly considered, stimulating and evocative, this very personal story endorses the changing of the guard from old, refractory men to a new generation of free and fervent thinkers.

Mahana is in cinemas from 8th December through Entertainment One.