Blood Wars is the fifth installment of the Underworld franchise. With the recent saturation of vampire flicks finally dying down this is a welcome kick to boost along the eternal fad. It’s been sixteen years since Kate Beckinsale first donned the skin tight leather to kick werewolf and vampire butt alike, and true to her immortal character she hasn’t aged a day.

For fans of the series this is another home run. The acting is top notch, the ideas are fun and outlandish, and at its core is a kick ass mythos. Kate as Selene is still on the run from vampire and lycan alike after the 2012 installment,  Awakening. On one side are the lycans who hunt her, erroneously believing she has the knowledge of her unique hybrid daughter’s whereabouts. The vampires meanwhile, after getting sick of Selene killing their clan leaders (despite trying to kill her in the firstplace) have officially made her enemy numero uno. What happens next is a thrilling weaving tale of blood and power. 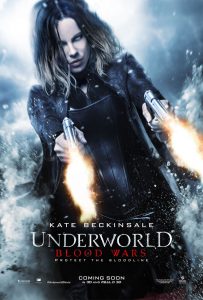 What distinguishes blood wars from the previous installments most of all is the political nature of the film veiled by the guts and gore. The feature mirrors the changing political landscape of Game of Thrones more so than the deep rooted mythology of True Blood. The power dynamics are intriguing enough to begin with – high stakes political chess. By the end of the film, however, that cerebral landscape devolves into political jenga where motives are stretched paper thin. Without giving spoilers away, the ending of the film contains more than its fair share of exasperating hair pulling character twists.

Perhaps talking about illogical character choices is a fool’s errand in a fantasy world of monsters. After all, the draw card of the film is the action and monsters. And of course the death scenes – to which Blood Wars can boast perhaps the best effort since Bill Nighy‘s grissly end in the original. On top of all that alluring action is the addition of the mysterious ice vampires, sexual bargaining with the gender roles reversed, and the newest generation of amped up werewolf. Lazy writing or not this is simply a cool movie.

Underwold’s success can be attributed to it’s simplicity. At the end of the day this film is a kick ass sequel which doesn’t reach too far or try to over complicate. You know what you’re going to get walking into a film like this, which depending on your outlook could be a good or bad thing. Perhaps the only trope that is becoming tiresome is the continual plight of the werewolves, who habitually seem to serve as the dissident underclass finally united by an enigmatic leader film after film. While Tobias Menzies is a standout as new lycan leader Marius, the cyclical theme rehashed in each film is growing a little tiresome. Overall, however, this is mindless and highly fun entertainment for the blood nerds.

Underworld: Blood Wars is in cinemas from 1st December through Sony Pictures.

Written By
Ben Isbel
More from Ben Isbel
Luca Guadagnino refers to his latest feature Suspiria as a cover version rather...
Read More