There’s an interesting trend with current biopics to depict the shady beginnings of current market empires. There’s The Social Network charting Facebook’s beginnings as a series of court battles about stolen intellectual property and the betrayal of Eduardo Saverin. Steve Jobs portrays everyone’s favorite turtleneck wearing tech mogul as a complete asshole. There Will Be Blood depicts the beginnings of America’s booming oil industry as a ruthless capitalistic coup ruled by robber barons.

The latest film cut from the same vein is John Lee Hancock’s biopic of Ray Kroc, a.k.a the man who turned McDonalds from a single Southern Californian burger store into a restaurant empire the likes of which the world had never seen. In The Founder Kroc (Michael Keaton) is a milkshake machine salesman who drives around the USA looking for his big break. His ego is only matched by his fiery ambition; he spends his nights practicing his sales speeches and listening to sermons on persistence. He’s constantly searching for the thing that will make his name and fortune and he stumbles across it when he visits a tiny burger place called ‘McDonalds’ in San Bernardino, run by the brother team of Dick and Mac McDonald (Nick Offerman & John Carroll Lynch). Their revolutionary way of making food intrigues Kroc, and soon Dick and Mac offer him a place in their business, unaware that they – to put it in their words – have just let a wolf into the hen house.

The Founder is a strange beast of a film. There are so many contradictory elements to this interesting real life story that it’s difficult to figure out who the audience is meant to be rooting for and what we’re meant to think as we walk out of the cinema. Our main character is pig of a man who sees business as some sort of Darwinian struggle, dog-eat-dog, rat-eat-rat, only the most ruthless survive – a character that might seem ridiculous if it wasn’t for the fact that a man like this has just been elected President of the United States. He’s like a living checklist of everything that’s worrying about capitalism, the way it encourages people to expose the worst natures of themselves and it being beneficial to take down other hard working people. We’re not supposed to like Kroc but we are put in the position where we try to understand him; whether we’re supposed to admire his tenacity or be disgusted by it is another matter. 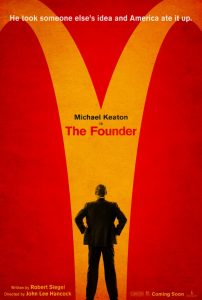 Keaton delivers yet another great performance, being simultaneously intriguing yet repellent as Kroc. He’s in nearly every scene so the film’s success rests largely on his performance, but when you have Keaton at the new apex of his career you know you’re in good hands. Nick Offerman is the other great take out of the film. His reputation is often cemented in his comedic persona but when he tries out his acting chops in serious roles one quickly remembers that he’s often really good in them.

The one thing that tips The Founder from being mediocre to actively not good is the film’s treatment of women. With all the talk this year of diversity and strong roles for women this is the perfect case of the exact opposite. This isn’t an openly sexist film by any stretch but it does exemplify the subtle and quietly insidious way that that film can omit women’s stories and revert back to old archetypes. It doesn’t do it deliberately but it’s certainly there.  Laura Dern as Kroc’s wife Ethel has to be one of the most pathetic roles of 2016. It’s a paper thin role with absolutely no second or third dimension and the way that Kroc and the film treat her is terrible. Anyone could have played her but poor Laura Dern drew the short straw. Same goes for Linda Cardellini as one of Kroc’s business associates; she gets a larger role than Dern but her character has hardly any depth and the second she arrives onscreen you can pick exactly where her character will fit in the narrative.

McDonald’s feeds one percent of the world’s population on a daily basis. Say what you will about their food and their service, it’s a wholly unique business and food empire that changed the way that the restaurant industry operates. The Founder does do an excellent job of telling the very interesting story of McDonald’s genesis which will change the way you think about the Golden Arches, but as a film it has the distinct mark of being put through a Hollywood filter. Clearly trying to replicate the formula of The Social Network, it misses all the things that made The Social Network so good; the tight script, nuanced main character and fascinating moral questions. For a film about a business whose motto is “I’m lovin’ it” it’s doubtful many will be saying this about the film they’re watching.

The Founder is in cinemas from 24th November through Roadshow Films.

Written By
Simon Storey
More from Simon Storey
At some point there must have been a very strange series of...
Read More