André Øvredal knows how to make a genre film better than nearly anyone else. 2010 saw the beginnings of his international reputation with Trolljegren/Troll Hunter a bombastic and thoroughly entertaining found footage piece about hunting trolls in the Norwegian woods. Øvredal’s first English language film comes to Monsterfest 2016, Melbourne’s little known but much loved genre film festival of all that is weird and wonderful on the international circuit.

We open in a family home in Middle America. Blood and bodies are scattered around the house in a particularly gruesome crime scene. Something horrible happened here and no one can comprehend why. It’s when the local police chief (Michael McElhatton, recently seen as Roose Bolton in Game of Thrones) arrives that the forensic team stumble across something odd. The body of a young woman is buried in the basement, she’s ghostly white and her corpse is perfectly preserved.

Tommy Tildren (Brian Cox) and his son and apprentice Austin (Emile Hirsch) are coroners working in their family run crematorium. The body of the young woman – unidentified and therefore labelled with the default name Jane Doe (Olwen Catherine Kelly) – soon arrives and their autopsy begins. Things soon begin to go astray as they realise that this Jane Doe has buried secrets more horrifying than they ever could have imagined. 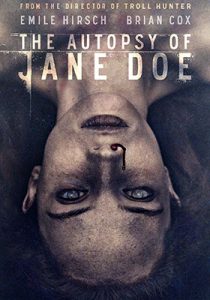 Horror is a fickle genre but also one that yields the best results when everything comes together. The Autopsy of Jane Doe is one such example, blending a great script, good actors and an excellent premise. All the parts of this very well made film mesh perfectly and the result is one of the best horror films of the year.

Written by Ian B. Goldberg and Richard Naing, the script puts a lot of effort into the characters. There’s nothing that kills horror faster than underwritten characters doing stupid things just so the plot can continue – thankfully there’s none of that here. Tommy and Austin are fleshed out and memorable so when the strange and wicked things start happening it’s all the more scary seeing it happen to characters we care about. Brian Cox always has good screen presence but moreover it’s nice to see Emile Hirsch again; ever since he made his name in Sean Penn’s Into the Wild he’s been dancing around the edges of the film industry but never really broken into the big leagues. Seeing him from time to time is always a nice surprise.

There are many things that stick in the memory about this film but the one aspect that towers above the rest is the Herculean effort of Olwen Catherine Kelly. Kelly plays the titular Jane Doe, meaning that she spends the entire film naked, lying on the morgue slate and never moving. Not even once. This doesn’t sound like much but the way she’s able to avoid even the slightest movement is unsettling to say the least. It’s impossible to know how much of it was Kelly simply lying there and how much of it was very detailed prop which is cut open in the autopsy scenes. The film frequently cuts to a close up of Jane Doe simply staring into the camera and this never fails to be creepy as hell. This is Kelly’s first film role and it will either be the easiest or the hardest role she ever plays; no matter which it turns out to be, she is incredible.

Øvredal very rarely goes for cheap scares. There’s none of the ‘cattle prop cinema’ that plagues the multiplexes; this is true horror which relies on build-up and pay off and it’s absolutely terrifying. Special mention must also go to the gore and the body effects. Considering most of the film takes place in a morgue there’s many scenes involving corpses and they look amazing. Couple this with the sound design, which makes the autopsy scenes particularly gruesome with all the snapping and squelching noises of surgical equipment cutting into flesh, and you get one of the most squirm inducing cinema experiences of the year (in a good way).

2016’s trend of excellent horror cinema continues with Øvredal’s genuinely horrifying new entry. For any horror fan this delivers exactly what you want and what better place to see it than at Monsterfest. 2016 has seen the release of The Vvitch, Don’t Breathe and Under the Shadow; one of the best line ups in years. Then again, considering the news cycle of 2016 played like a 365 day long horror film, a bit of R‘n’R in the comforting grasp of fear and blood at the cinema might be what’s needed. Tune in for 2017 when we all flock to see reruns of A Serbian Film, Human Centipede 2 and Antichrist to cheer ourselves up while witnessing the first year of a Trump presidency.

The Autopsy of Jane Doe screens as part of Monster Fest from 24th to 27th November at Lido Cinemas through Umbrella Entertainment.

Written By
Simon Storey
More from Simon Storey
With what would have to be one of the most astonishing debut...
Read More