It may seem funny to compare, but the Finnish film The Fencer is a lot like watching School of Rock, – a stripped down version that refrains from playing ACDC. Not that School of Rock didn’t and shouldn’t receive recognition but The Fencer is perhaps more palatable. Where status is concerned, The Fencer won best foreign film at the Palm Springs International Awards and was nominated/shortlisted for the 2016 Golden Globes and Academy Awards.

The Fencer is a postwar film set in the 50s, based on true events around a former fencer/teacher Endel Nelis (Märt Avandi). As told in a little history lesson, the film’s location, Estonia (bordering on the Gulf of Finland), has been formerly occupied by Nazi Germany, and is now in the Soviet Union’s hands. Arriving in Haapsalu, Estonia, Endel settles into normal life as a sports teacher, but to the community he is merely a reminder of the past.

This is a straightforward, natural piece. It is quite refreshing to watch this sort of adaptation unfold, without being too caught up in costuming or dialect. Although this reviewer did enjoy the film Suffragette, mainly for its political importance, sometimes watching a narrative with cockney accents or shabby costumes can feel like the ensemble could break out into a routine at any moment. It can be camp. It can also lose authenticity on screen. It may work for the stage but when you compare these two films, The Fencer leads in authenticity. 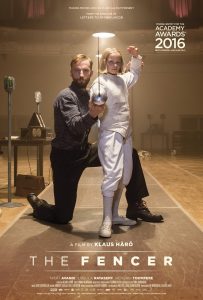 At the same time, Suffragette did a good job depicting history. Viewers really get a sense of the events and what they could have meant in real time. This is attributed intimately through the handheld camera work, enabling viewers to follow the subject, adding more excitement than the usual stilted facts. Funnily enough, The Fencer doesn’t use handheld camera work, yet still manages to bring the same impact on screen. Not so much that you get to follow Endel subjectively, but objectively it shows a bigger picture of the world they existed in. We learn about the community, the landscape and the domestic households. It is repressed and drab, apart from some really appealing bespoke aesthetics.

The Fencer is nothing much more than a beautifully acted piece, only maybe more if you are interested in this era. But for this reviewer the best aspect to the film is the way the characters look. Endel’s students are particularly freaky looking fair children. These handpicked blonde children embody the era and their costumes with strength.

The Fencer is not like School of Rock in personality. Endel’s character is nothing like your outlandish Jack Black. Avandi plays Endel with poise. Endel is detached but when he does offer the viewer a rewarding glimmer of hope, one could say that School of Rockness comes out and like Jack Black, Endel is determined and passionately pushes his views forward.

The Fencer is a composed film with a dark backdrop. This may not win awards in avant-garde cinema, but it portrays a story and utilises space accordingly.

The Fencer is in cinemas from 24th November through Palace Films.

Written By
Louise Agostino
More from Louise Agostino
Vincent Van Gogh's life as an artist and crazy man is celebrated in Loving Vincent. Directed by Dorota Kobiela and...
Read More