Not to be confused with the exceptional 2011 film starring Felicity Jones and Anton Yelchin, Like Crazy (or to use its Italian title, La Pazza Gioia) is the latest feature from Italian Paolo Virzì which he wrote, directed and scored. Boasting two excellent central performances and taking home quite a few awards from the Nastro d’Argento (Italy’s national film awards) this is a bittersweet comedy which has edges as sharp as blades.

Beatrice (Valeria Bruni Tedeschi) is a patient at a church-run psychiatric facility in Tuscany. She fancies herself a matriarch of the centre, oblivious to the fact that her never ceasing monologue of whatever happens to be in her head causes much more harm to those around her than it helps. She’s a middle aged woman with the uncanny talent for lying and a voice turned husky after a lifetime of cigarettes.

The power dynamic soon shifts when a new patient enters the facility; Donatella (Micaela Ramazzotti) is shy, painfully thin and with scars criss-crossing over her wrists. She is like a mirror image to Beatrice and can’t quite make sense of the events that led up to her being committed to a mental hospital. It’s when the two are out for a day trip that the story kicks in. Beatrice convinces Dona to get on a bus with her, and in the heat of the Tuscan summer they go on a road trip in an adventure reminiscent of Thelma and Louise’s ill-fated journey. 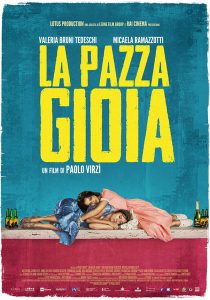 Like Crazy has quite a familiar set up which is usually the beginning of the madcap adventures of a feel-good comedy. A group of patients at a mental hospital escaping for a few days and going on a journey has been the blueprint of some excellent films – One Flew Over the Cuckoo’s Nest being the standout best. Virzì’s film does have all the hall marks of that grimace inducing word ‘dramedy’, but when looked back on the ‘drama’ part is far more prominent.

Paolo Virzì is known for his careful balance of Italian caricatures set in a realistic world. Beatrice is as Italian as one could imagine, a passionate woman who talks with her hands and has a cigarette perpetually lodged between her teeth.  The performances that bring both her and Donatella to life are the best parts of the film. Playing someone mentally ill brings with it many difficulties but Tedeschi and Ramazzotti both do excellent jobs, never overdoing it and managing to bring a sense of dignity to characters who have been dealt a bad hand in the unfair game of chance that is life.

It’s disappointing then to report that for every thing that Like Crazy does well it also does something which doesn’t work that well. It ends up being quite repetitive; there is scene after scene of the two women getting into trouble and then running away with Beatrice’s motor mouth at full speed. There is also the case that the drama and the comedy don’t mix very well. The trick to making a comedy-drama is making sure that both genres complement each other, with the drama being the realistic situations that act as the platforms for comedy. Ideally they should make you laugh but also have something to say about the human condition in the process, but here the two seem opposing forces and quickly make the film less funny than it should be and not as dramatic as the themes deserve.

Like Crazy has a set up that should make for an interesting feel-good comedy but the result is mixed. Beautiful Italian scenery and two excellent performances aside, this is a film which raises chuckles one minute but then goes on awkward segues which distract from the whole the next. It’s great to see a female-centred comedy deal with real and important themes but the overall execution is strange. It isn’t a bad film but rather a disappointing one which doesn’t live up to the potential it shows.

Like Crazy is in cinemas from 24th November through Hi Gloss Productions.