The tagline for The Phoenix Incident is “blurring the line between fiction and reality”. Perhaps more appropriate would be “blurring the line between entertainment and apathy”. For fans of conspiracy/UFO/mythical documentaries, this film has all the potential to get the juices flowing. While it has promising beginnings talking of anonymous government sources, cover ups, and found footage, it begins to falter early on and is never really able to move past a few major flaws.

The biggest problem with the film is its aura of authenticity. With this kind of mockumentary there are really three broad categories to fall into. The first two are: highly believable (think Blair Witch), and mildy believable with enough consideration and devotion to ensure enjoyment, whether it’s ironic or sincere (Finding Bigfoot, The X Files). The last category is flat out unbelievable and contrived, and unfortunately The Phoenix Incident sits here. The holes are just too big for the film to really make any sense, the plot isn’t that interesting, and the editing and direction is too jerky and scattered. 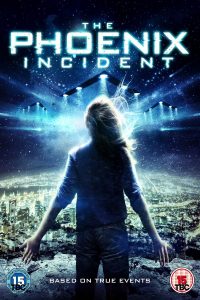 The main plot seems to be exploring the famous Phoenix Incident of 1997, when an entire city reported seeing strange lights. These were later found to be flares; this much we know is true. What the film is really interested in is a group of four young men who went missing on the night of the incident, and there is at least one dodgy internet article verifying this disappearance. Incredibly enough, the four happened to be amateur film documentarians so there is plenty of footage of them for the film to show. Also incredibly, the four men decided to film most of that entire night of the incident to the point of the how and why of their disappearance. Even more amazingly, those tapes have been leaked from the government and made it to the hands of these film makers. The jerky cam found footage with plenty of off focus shots makes up the bulk of the film intercut with some interviews from anonymous sources who aren’t well disguised.

After watching this the only thing I can deduce is that rather than uncovering a government conspiracy, The Phoenix Incident IS a government conspiracy.  Thanks to my own secret anonymous source from within the Illuminati, I can now disclose that this film is in fact well disguised propaganda. By releasing unbelievable mockumentaries on famous alien sightings the government hopes to discredit these incidents to the layman/woman on the street. These films are purposely made to appear dull with weak arguments, ensuring big film studios with the potential to create high production probing films on said incidents are detracted from doing so, knowing that previous films on such topics have already bombed. Thanks to the reception towards The Phoenix Incident, no doubt James Cameron will have cancelled his newest project, ‘The 1997 Phoenix Incident: What Really Happened In Arizona’.

The Phoenix Incident is available on DVD and VOD through Bounty Films.

Written By
Ben Isbel
More from Ben Isbel
Andrey Zvyagintsev, master of nihilism, focuses all his dark energies on his...
Read More