It’s been five years since we bid farewell to Harry Potter on screen and lost our will to live through to November. Harry Potter has indeed lingered beyond the screen, with J.K. Rowling’s Harry Potter and the Cursed Child currently selling out on the West End despite its audience being required to attend two separate performances to see the entire show. Even Daniel Radcliffe has managed to find work, continuing his attempts to prove that he actually can act. But the absence of any films set in Harry’s wizarding world has left somewhat of a hole, only able to be filled with excessive fan fiction and Harry Potter trivia nights. Praise be to Dumbledore that finally, Potter nerds have something to get excited about once more, with the Harry Potter spin-off, Fantastic Beasts and Where to Find Them.

Directed by David Yates – responsible for the last four Harry Potter films – the film retains the special charms of the franchise. In a sense viewers will feel right at home, even though the action has shifted to America. The production design is sublime, the visual effects top notch, and that familiar score is likely to warm every Muggle’s heart, however it’s difficult to get swept up in a film that requires viewers to start all over again with a fresh batch of characters. Hardcore Potterheads will likely recognise and relish in small links, but those with only a basic knowledge may easily miss these (such as this reviewer who didn’t even remember who Grindelwald was). Spending the whole film waiting for Tom Riddle to show up only led to disappointment, and the special cameo at film’s end was less rewarding than it should have been given who the actor was and his very low likeability as a human being. 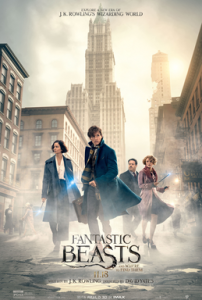 But at least to counter that we have Eddie Redmayne, one of the most likeable actors to grace this earth. It seems crazy, on the one hand, to learn that Redmayne was dismissed from his audition for Harry Potter and the Chamber of Secrets after just one line. But it makes more sense when you learn it was for the role of Tom Riddle, because Eddie is no villain (see Jupiter Ascending for his Voldemort impersonation and the only bad performance he’s ever done, or better yet, don’t). Redmayne is a joy to watch as Scamander, and a wonderful star for the Fantastic Beasts franchise. Daniel Radcliffe can’t compete.

J.K. Rowling herself makes her screenwriting debut, and is slated to write all five (yes five) films in the series. Keeping in mind the source material here is merely a 128 page book, it will be exciting to see what new ideas she comes up with. The film – at 133 minutes – does feel long, but that’s partly because there are scenes of genuine interaction between the new characters that aren’t rushed. Rowling is afforded less space for character development on the page than she would be used to, but she does a stellar job in making us care for characters we haven’t known long. Kowalski, in particular, brings a lot of heart as the No-Maj unwittingly roped along for the ride – a Ron Weasley of sorts, sans wand.

Ultimately, Fantastic Beasts is no Harry Potter. There are no kids, no Hogwarts (though it does get a mention), no Snape and no glorious Emma Watson whining in her posh little voice that “I’m going to bed before either of you come up with another clever idea to get us killed, or worse, expelled!” Fantastic Beasts is more political and less family friendly (although Harry Potter did get very dark), and it only ever gets mildly exciting. However, as the first film of five it feels more like a lengthy set up for exciting new times ahead. With any luck this is the start of something special, and a few familiar characters may be yet to surface. It’s not quite as fantastic as the title suggests, but it certainly has potential.

Fantastic Beasts and Where to Find Them is in cinemas from 17th November through Roadshow Films.