Each day we make choices. Perhaps they are mostly simple choices, but they are choices nonetheless. Sometimes we are forced to summon our inner moral principles and choose between what is right and wrong. This, in a nutshell, is the general idea behind the cinematic adaptation of M.L. Stedman’s 2010 literary bestseller The Light Between Oceans.

Fresh from the fight, World War I veteran Tom Sherbourne (Michael Fassbender) takes a job as lighthouse keeper on Janus Rock in 1918. The lighthouse is positioned between the Indian and Southern Oceans in South-Western Australia and is, to put it mildly, dreamily beautiful. Tom meets Isabel (Alicia Vikander) and after a few chance encounters in a far but neighbouring town the two marry, set up a home back at Janus and become pregnant. Rather immediately after her second painful and distressing miscarriage, Isabel hears a baby’s cry from the ocean, then spots and pulls a small boat to shore with Tom’s aid. Inside is a crying baby along with a deceased male. This is where choices most pointedly come into play.

It is easy to think that in this situation one would easily report the crime to the local law enforcement. This, however, is not the reality of the Sherbournes. Their deep mourning was just reigniting and thus the choice to keep the baby and bury the man is the one chosen if not reluctantly by Tom. Years later, another chance encounter transpires when the child’s biological mother (Rachel Weisz) meets the Sherbournes at a local town event, pushing the choices made by Tom and Isabel to a real forefront. 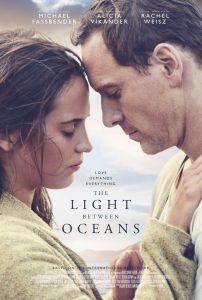 Like many films set in Australia, the land is positioned as a baron yet furtive and destructive beast.  Wild weather coincides with Isabel’s first miscarriage, undeniably highlighting the physical and emotional storm within their lives. Speaking of locations, the fictional seaside towns Janus and Partaguese (set in Western Australia though filmed in Tasmania and New Zealand) are staggeringly beautiful with bleak and effective lighting from cinematographer Adam Akapaw.

When considering the locations, questions of national cinema come into play. The story is set in Australia, made in Australia by a large number of Australians, and features a supporting cast of Australian players. However, the film is a co-production between Australia, New Zealand, the United States and the United Kingdom. All three lead actors are also from European countries with an American writer/director, and British/American producers. But then there’s Jack Thompson in a supporting role. How much more Australian can a film get? It seems that the answer is somewhere between the lines. Or between oceans.

National cinema questions aside, the chemistry is strong between Fassbender and Vikander, proved by their onscreen relationship becoming an offscreen reality during the filming. The performances capture the required emotion well, but no performer really stands out amongst the crowd. At best, Rachel Weisz gives the strongest performance, but that really doesn’t say too much. It’s also nice to see Garry McDonald and Jane Menelaus give solid supporting performances as Isabel’s parents.

Writer/director Derek Cianfrance does a fine job of faithfully adapting M.L. Steadman’s book onto the big screen. That said, there is something missing about this film, with the result feeling like everything is running at around 70% capacity. The film is in no ways bad or particularly boring and thankfully avoids becoming too saccharine as well, but there is a general flat feeling that leaves the viewer wanting something more.

The Light Between Oceans is in cinemas from 4th November through Entertainment One.