How do we critique Marvel movies when they feel so difficult to orient in the wider framework of film? The problem is they are, of course, designed like that; they’re their own ‘cinematic universe’. I always find myself comparing them, not to the good and the bad that surrounds them on the screens, but to those Marvel ‘properties’ that came before – “at least it wasn’t Iron Man 2 bad”. But we shouldn’t be grading on a superhero curve, we should be tying these movies down and holding them to the same standards as the rest – only that way will they get better. But with their latest movie, Doctor Strange, the conclusion inevitably comes down to this – it’s full of problems, but it’s one of the best films Marvel has made.

Benedict Cumberbatch stars as the titular doctor, a brilliant, arrogant neurosurgeon whose hubris sees him involved in an accident that leaves his hands useless for his profession. Increasingly desperate and bitter, he follows a trail of healing to Nepal, where he meets ‘The Ancient One’ (Tilda Swinton) and discovers there’s a lot more to the universe than he thought.

Let’s look at those problems first. Like every superhero origin story, the plot sometimes gets bogged down in expository monologues and follows the typical thematic structure of ‘arrogant guy learns to see beyond himself, growing to understand sacrifice and heroism’. Strange is just an arsehole and the audience feel no connection to him, no sympathy when he loses, or pushes away, everything. Though a commanding screen presence, Cumberbatch doesn’t do much more than we’ve already seen with his turns in Sherlock and Star Trek, and his American accent is distracting both in terms of its redundancy and in its similarity to that of TV’s Dr House. 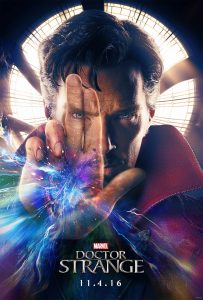 The film is also guilty of criminally wasting the talents of Rachel McAdams, Chiwetel Ejiofor and Mads Mikkelsen. They play Strange’s concerned ex and colleague Christine, fellow Ancient One disciple Mordo, and barely written villain Kaecilius respectively. Swinton makes the most impression as the bald headed Sorcerer Supreme, but her role prompts the questions of: why is she the one to keep her British accent? Why has an Asian character from the comics been changed to a white person? And why – in a film primarily sent in Nepal – are there so few Asian characters?

The film’s other issues are those that plague all Marvel movies – from attempts at comic dialogue that mostly fall flat, to choppy fight editing and a score that merely takes its musical cues from the Marvel soundboard and downright steals from The Matrix. It offers up a composition that has as much personality and memorability as a pair of surgical gloves. All this makes it sound like Doctor Strange doesn’t work, but that’s not true. Despite these problems it stands out from its superhero brethren because, while the Marvel factory is putting out films that all look the same, this one’s fallen off the conveyer belt, smashed into a million pieces, and been put back together with no small amount of glitter glue.

As fits a story that deals with multiverses and powers that can warp time and space, Doctor Strange is filled with mind bending visuals that make it one of the only films where 3D actually adds something. Arguably the best part of the film is Strange’s first visit to the astral plane, a full-on acid trip that just begs the viewer to come to the screen on something that will help them truly appreciate the visual power. The action scenes play like a hyped-up mix of Inception, a Rubix cube and a kaleidoscope all rolled into one. The 3D actually does add an extra dimension, adding to the wonder when the world becomes stretched, warped and folded. Though the CGI can’t always quite keep up with the thought behind the image, it’s refreshing to see Marvel take a step away from their usual style of action,  and credit must go to director Scott Derrickson. For pure visual panache alone, Doctor Strange heads to the top of the Marvel class.

Doctor Strange is in cinemas from 27th October through Disney.