I, Daniel Blake is the Palme D’Or recipient for 2016 and the latest feature of underground British cinema king Ken Loach. Dave Johns delivers a no nonsense performance as Daniel Blake, a carpenter struggling to access state welfare after a heart attack. He finds a kindred soul in Katie (Haley Squires), a single mother also trying to claim benefits. The film lacks no ambition in the punches it throws at Britain’s class discrepancies. The effort is admirable but the film is restricted with its thickly contrived, emotionally charged circumstances.

Loach cleaves clear neat lines through his constructed society.  First by privilege then by generation, Daniel Blake doesn’t fit into the new computerised global world. Or rather the world won’t accommodate Daniel Blake. His attitudes hark back to the days of yonder when milk was delivered by hand and a handshake deal was unbreakable. Daniel is a shrewd hardened soul, stoic and unafraid to call out BS when and where he finds it. He’s really an older more or less orange-headed shaped Karl Pilkington.

At the British welfare department he runs into Katie. From hereon the film’s tone changes from acerbic comedy to a tragedy of two people’s journey for dignity and survival. Katie survives on mouthfuls of fruit, barely providing enough meals to nourish her two children. Ignoring his own increasingly dire situation Daniel steps in offering what little he can in money, time and his own handyman skills to help repair her rental. 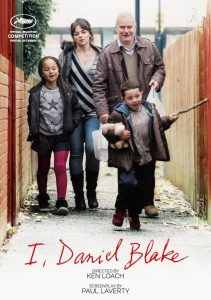 The problems dealt with within the film are pressing and wholly legitimate, but the brush Loach uses slathers and overflows with overt sentimentality. In lieu of the outrage Loach is so eager to elicit within the viewer is a sense of growing exasperation. Every scene may as well be introduced with the voice over ‘and as if that weren’t bad enough’. Seriously though the subject matter may be, the whole film is ripe for parody with its exponentially worsening circumstances. Famed documentarian Werner Herzog is on record stating that facts do not constitute truth. Used sparingly it’s sage advice, however the sentiment seems to be the core mantra of this film, constructing an almost unbelievable reality for a personal propaganda.

When the conclusion finally hits feel free to roll your eyes. Even Stevie Wonder could see this one coming. That’s not too say the film is disappointing overall – it isn’t. If you can get past the manufactured scenarios the journey is worthwhile enough. Daniel Blake’s hardened acumen and common sense interactions with useless bureaucracy are worthwhile viewing. The moments between him and Katie’s young family are warm and tender. The two have a great platonic on screen chemistry.

All great tragedies hit hardest when the protagonist’s circumstances are decided by fate and not choice. While Blake’s tale fits the former, the strictly black and white morality he exists within grows tiresome. The myriad of characters introduced are poor, wholesome, selfless, and down to earth. Or they are representatives of the ‘system’  i.e. cops, middle management drones, etc. who all possess zero empathy.

The position Loach argues for is valid, if somewhat cheapened by hyperbole. There are certainly problems with individuals falling through the gaps of government support. Daniel Blake doesn’t represent welfare seekers, but the system should be malleable enough to support Daniel Blake. Everyone deserves dignity and respect.  At its best the piece is a scathing commentary coupled with heart filled relationships which is surely what its audience at Cannes found. For others (and I expect the real life Daniel Blake’s) the experience will be an exasperating encounter.

I, Daniel Blake screens as part of the British Film Festival from 26th October to 16th November.

Written By
Ben Isbel
More from Ben Isbel
For all intents and purposes Blair Witch is more a modern remake then...
Read More