In the style of film where ordinary folk meet with hilarious and extraordinary circumstances, there are plenty of examples to choose from. Keeping up with the Joneses adds to the list but really doesn’t add much. Working within the conventions, this film offers a few laughs and enough distraction for entertainment purposes, but little beyond that.

Jeff Gaffney (Zach Galifianakis) is a mid-level HR guy at a large aero-space company. He spends his days attempting to resolve petty staff squabbles with mixed success. His wife Karen (Isla Fisher) is an interior designer, working from home to raise their two boys. When the boys go to summer camp, Jeff and Karen befriend their new neighbours – the worldly and debonair Joneses. Tim (Jon Hamm) and Natasha (Gal Gadot) are apparently ready to settle down, and have chosen this particular cul-de-sac in which to do it. But Karen has a nose for secrets, and quickly realises that the Joneses are actually spies.

Keeping up with the Joneses is quite slow to get moving, but then once it starts nothing much happens. The key questions of the film – Are the Joneses good spies or bad spies? How similar to Mr and Mrs Smith is this film? – are resolved fairly quickly. From here the only place to go is between explosions and shoot outs. 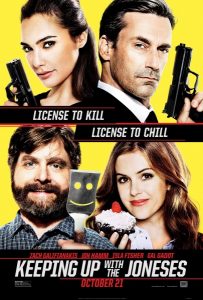 There are some very funny one-liners, dispersed fairly evenly between the leads. Galifianakis and Fisher are proven comedic talents, and Hamm and Gadot hold their own in good company. More could be made of the comedy, as this team are clearly skilled but also have quite good on-screen chemistry between them. Fisher and Gadot have a memorable scene shopping for lingerie; if it is possible to keep from being too distracted by the state of undress, then it’s possible to witness the good banter and camaraderie developing between the two actresses.

The film dips into some quite interesting moments and hints at something bigger. Jeff has a funny little outlook on life, and in Galifianakis’ hands the character has real potential. The relationship between Jeff and Tim develops in a strangely convincing way and opens an avenue for good comedic fodder. Unfortunately the writer Michael LeSieur and director Greg Mottola choose to go with triviality rather than attempt any depth. Likewise in the handling of Karen and Natasha, where partial nudity seems to be the easy option, rather than giving them more to work with.

Keeping up with the Joneses should be better than it is, it is disappointing that the film, while offering some promise, is a little uninspiring. That said, there are certainly worse ways to spend an afternoon and this film is pretty easy to enjoy.

Keeping up with the Joneses is in cinemas from 20th October through 20th Century Fox.

Written By
Amy Taylor
More from Amy Taylor
With a title like Exodus: Gods and Kings, you can be pretty...
Read More